Social media types who enjoy measuring their "popularity" in the social media arena are in for a shock.

Their Klout score could be wrong. Instead of a gold standard measure of how much influence they have on their peers, it could just be a measure of how noisy and attention-seeking they are...

A Twitter test by an SEO expert shows that it is possible to "game" Klout – the Twitter app that lets you measure your influence on social media by giving you a score out of 100. search and social marketing specialist Yousaf Sekander found that it is possible for a spam bot to be ranked as very influential by using particular tricks.

Klout has always been something for the narcissists, but it is now being taken increasingly seriously: Audi used it to offer people competition access, and a hotel in Vegas is considering using the Klout score of its guests to determine what kind of treatment they should receive.

But it seems that simply tweeting "YOU WILL BE ASSIMILATED" at random strangers can push your score right up above normal people, because of Klout's interest in what gets reactions: "The Klout Score measures influence based on your ability to drive action," it explain on its site. On his blog, SEO expert Yousaf Sekhander takes the case of Twitter bot – @_BorgCollective. The _BorgCollective's Twitter feed looks like this: 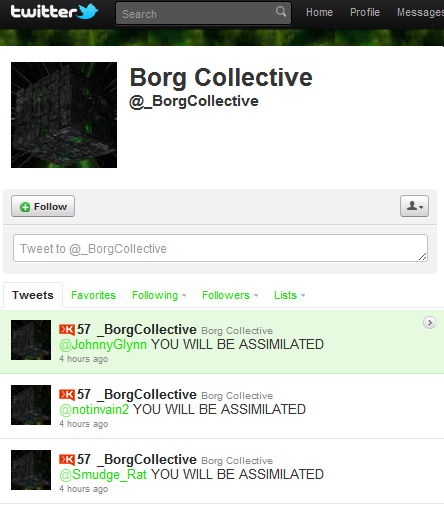 It follows 46 Twitter profiles, has 104 followers and is currently listed six times. But its Klout ranking looks like this. 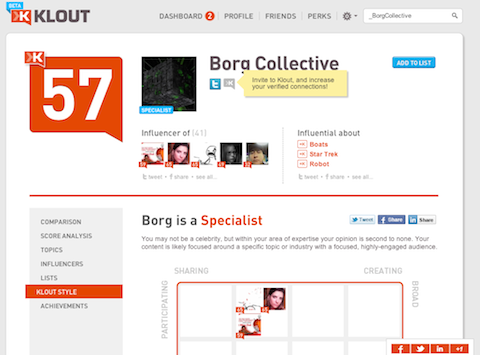 The CEO of Klout Joe Fernandez responded to the blog post in the comments, admitting that that yes, that is how Klout works – and that by Klout's criteria, BorgCollective is influential:

We believe influence is the ability to drive action. Is this BorgCollective account silly? Absolutely. Take a look at Twitter search, though, and you will see a long list of influencers engaging with that account over the last few days. It's a meme that is influencing people right now and will likely die down quickly.

So seems that tweeting something provocative but not immediately spammy to lots of people with lots of followers could get you a high Klout score – and the free rides in Audis and VIP hotel treatment that comes with it. Even if they just say "sod off", Klout will still count it.

In Klout, as in life, being a provocative attention-seeker makes you appear more influential regardless of whether you offer genuine value.

Yousaf writes: "I think there should be a clear distinction between 'noise', 'activity' and 'influence'. If someone is active and noisy, it does not necessarily mean that they are influential. From what I have seen, I think Klout is simply measuring levels of activity without filtering out noise and is therefore not in a position to measure influence."

Coincidentally, it is interesting to note that the founder of Klout, joefernandez, has a much higher Klout score than the founder of Twitter Evan Williams... Go figure. ®