Two PODs in an HPC

Airbus is one of the first industrial HPC customers in the world to plunk its most recent supercomputers into containerized data centers.

Hewlett-Packard inked a supercomputing upgrade deal with the aircraft manufacturer four years ago, and in the final phase of the contract earlier this year, HP put two of its Performance Optimized Datacenter (POD) containerized data centers at Airbus sites in Toulouse, France, and Hamburg, Germany. Airbus, which has experience in cramming as many human beings as is physically possible into a small, confined space, undoubtedly admired HP's ability to do the same with servers, storage, and networking inside modified shipping containers.

Airbus chose the 40-footer versions of the PODs, and equipped them with 2,016 of its ProLiant BL280 G6 servers, plus Quad Data Rate (40Gb/sec) InfiniBand networking and storage to hold data for the crunching. The machines have two sockets each and use Intel's X5675 processors spinning at 3.06GHz. The cluster runs Linux, of course, and was actually installed in time for the June 2011 Top 500 list, where it ranked 29th. The Top 500 considers this Airbus cluster one machine even though the two PODs are nearly 1,600 kilometers apart as the car drives and rated the 24,192-core machine at 243.9 teraflops.

The HP PODs were built and tested over several months at an HP factory in Erskine, Scotland, HP tells El Reg, and not at the HP PODworks facility that the company set up last October at its Houston, Texas PC and server manufacturing facility. The PODs were shipped by truck to France and Germany. 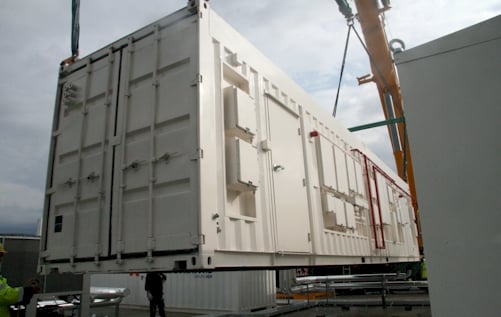 Prepping the HP POD for shipment from Scotland

It is interesting to note that Airbus did not opt for one of the EcoPOD 240a containers, which put two storage containers side-by-side and weld all the cooling and power to the top of the rack to make a more human-scale containerized data center. The EcoPOD 240a was announced in June, but by then, Airbus had already taken delivery of its two earlier-generation PODs. This is ever the way of the IT racket – there's always something better if you could just wait a little longer. Which you can't.

Airbus is a long-time HP customer and has used a variety of Itanium and Xeon clusters to do its computer aided design over the years. ®