A radical tech coalition has produced an open-sourced music visualiser that modifies input video rather than generating patterns - and interestingly the box includes a system-on-a-chip that could one day compete with ARM. If just 80 units sell, the "Milkymist" will have already paid its way.

Backer Qi is the company representing the chaps behind the Ben NanoNote: the open-sourced PDA which needed to sell 3,000 units to be viable. Just 1,200 sales later, the group has moved on to create its own system on a chip based around the (open source) LatticeMico32 processor, and fitted that into a video-creating box which only needs to sell 80 to be viable – though each one will cost $500. 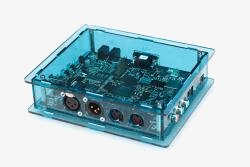 Milkymist takes an audio feed and creates the kind of visuals familiar to those who listen to music on a computer, but also adds a video input. The box will merge the pictures with the audio to create a combined rendering, in real time (the company claim <60ms latency).

What's remarkable is that a loose coalition of 10 or so people has managed to design a system on a chip and get that integrated into a production board to create a sellable product, all under the open-source banner. We were impressed when the NanoNote could be viable with a production run of 3,000, but to create any product with a viable production run of 80 is an impressive step towards entirely bespoke hardware.

The idea behind Milkymist is to make use of all those video projectors hanging off the ceilings of pubs and clubs, with a low-power, stand-alone, system which can be plugged in and then remotely controlled.

One might argue that a cheap laptop could do much the same thing, and we took that issue up with leading developer Wolfgang Spraul. He pointed out that just buying the software to create audio-responsive video in real time was expensive, and wouldn't have the same low latency or frugal power requirements, not to mention the cost of configuring and setting up aforementioned laptop.

Which is probably the most important aspect of the Milkymist box: it is a product designed for people to plug in and use, in contrast to the NanoNote which was really a $99 toy to fill the evenings of the technically-literate underemployed.

Open source, or "copyleft" hardware has a patchy history at best, but it's worth remembering that a dedicated group of idealists hacked away at Linux and its ilk for decades before companies came to understand that open source isn't, necessarily, profitless. Open-source hardware has a similar mountain to climb, but at least the company is only relying on shifting 80 of the Milkymist boxes, rather than the 3,000 NanoNotes Qi committed to manufacturing.

Wolfgang did ask us to mention that he still has 800 boxed and ready to sell, and that it will run mplayer these days, in case there are any technically literate people left with time on their hands, but the move towards creating a real product is an important step on the foothills of acceptability. ®