ICT teachers will need extra training to teach the new IT curriculum that science minister David Willetts announced this month, says the Institution of Engineering and Technology (IET).

Under the "Behind the Screen" initiative, students in 20 trial schools will be taught to write software as well as use it. But Dr Martyn Thomas of the IET has said that the corduroys themselves need more skills if they are to pass them onto the pupils. He said in an email: "Professional software engineering is as big a step up from school programming as civil engineering is from Lego."

He worries that teachers themselves aren't currently up to the job, stating that "it is vital that it is backed up with professional training and support for the teachers who will deliver the new curriculum".

According to the latest Department for Education school workforce census (PDF, page 43), conducted in November 2010 and released in April this year, there are 18,400 secondary school teachers that spend time teaching ICT in England.

Alan Berry, the IET's Policy Advisor for IT & Communications, said that industry figures were particularly concerned about the number of teachers qualified in computer science.

El Reg couldn't confirm the figure that Berry gave us that out of the 27,000 teachers qualifying in 2010, only three had a computer science degree - but the General Teaching Council told us that there are 6,803 teachers with ICT-connected degrees working in the UK (data correct as of 12 Jan 2011). The number of teachers who have been trained to teach computing-related subjects is 10,825 - the table below shows how many corduroys there are with training in a particular school subject. 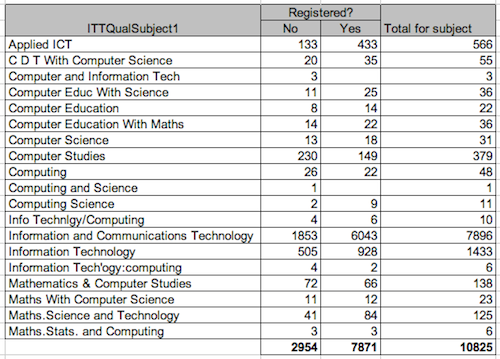 If you want to see a spreadsheet of the qualifications of those 10,825, you can find it here.

[NB: The General Teaching Council stressed to us that these were only the figures for England and that it didn't include all teachers working at independent schools. In total, there are 513,109 teachers working in England - so 1.3 per cent of them have ICT-related degrees and teach in secondary schools.]

"There are lots of resources freely available that schools just don't know about. I keep going on about open source but it just needs imagination and ingenuity. They're all taught in Microsoft and they just need to be told about what else is available.

"For example, all the kids are running around with iPods and iPhones, why don't they get them to write applications for them? They need to inspire students."

Take-up of IT qualifications has fallen in the past five years: GCSE numbers show a 57 per cent decline between 2005 and 2010. ®

If we're gonna have robot overlords, might as well learn why they crash
Software13 Jul 2022 | 51