Electric plane-flinger for US and Royal navies doing well

New tech which will bring back UK carriers is on track

The electromagnetic mass-driver catapults that will equip the next generation of aircraft carriers in the British and US navies are doing well in tests. This is important to both services, as their next carriers will be effectively useless without the new technology. 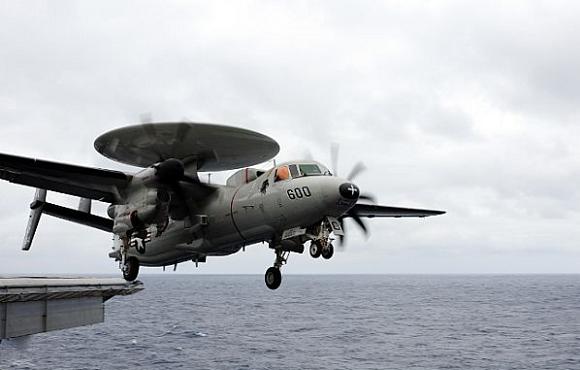 Soon, this will done with electricity

The latest milestone achieved by the shore-based Electromagnetic Aircraft Launch System (EMALS) prototype at Lakehurst in New Jersey has seen the electric cat successfully hurl an E-2D Advanced Hawkeye into the sky. The twin-engined Hawkeye is the US Navy's version of an AWACS radar aircraft, and is big and heavy for a carrier plane - weighing as much as 26 tonnes fully loaded. However the EMALS shot it into the air without difficulties.

“These successful E-2D launches continue to reaffirm my confidence in the EMALS program,” said Captain James Donnelly, USN, in a statement issued by the US Naval Air Systems Command (NAVAIR).

Current US and French carriers use steam catapults to launch aircraft: once upon a time so did British ones - the steam cat is in fact a British invention - but the Royal Navy lost its proper full-fat aircraft carriers following government decisions of the 1960s. It went to war in the Falklands and many other places using pocket-size, catapult-less carriers (which originally had to be referred to as "through deck cruisers" to escape the government ruling against carriers). These ships could operate only helicopters and short-takeoff/vertical-landing Harrier jump jets, but they proved surprisingly effective and useful nonetheless.

Following the horrific 21st century budget train crash at the MoD, whose effects have been compounded by more recent economic woes, even these smaller ships have now been decommissioned ahead of schedule and the Royal Navy is completely without fixed-wing aviation for the first time in almost a century.

The plan had been for the RN to replace its Harrier-carriers this decade with a pair of similar (though much bigger) ships. These would carry air groups largely made up of the B version of the F-35 stealth jet, now in flight test. The B-model F-35 is a jumpjet like the Harrier, and so would be unaffected by a lack of catapults.

Unfortunately the exceedingly complicated F-35B - the world's first supersonic stealth jumpjet - is set to be cripplingly expensive to buy and run, and its vertical-lift hardware means that it isn't as good a combat plane as the other F-35 types. Then there's the knotty issue of other types of plane that a carrier needs, most notably radar aircraft like the E-2D just tested with EMALS.

Without such radar birds, a fleet is effectively blind as ships' radars can't see over the horizon to spot low-flying strike planes or missiles. The lack of such aircraft was acknowledged as the single greatest factor behind heavy losses of British ships in the Falklands. Since then the RN has used radar helicopters, which are better than nothing: but a radar aircraft needs to fly high and stay up a long time, neither of which are things that helicopters do well. Replacing the current ageing radar choppers would have required some kind of expensive, custom rotary-wing solution (perhaps the unfortunately named TOSS tiltrotor option), which would, like the F-35B, have been expensive and less capable than a catapult plane.

All in all, the savings made by building cheap carriers were set to be wiped out and then some by terrifically expensive and not very capable aircraft. This was finally realised at last year's Strategic Defence Review, and it is now planned that HMS Prince of Wales will be fitted with catapults and arrester wires, with a view to operating F-35C tailhook jets like the ones the US Navy will get.

But Prince of Wales will be gas-turbine propelled, not a steamer as in days of yore (or a nuclear steamer like US carriers) and so she has no steam for traditional catapults. Thus the RN must take a punt on the newly-invented EMALS: if it doesn't work, nor will Blighty's next carrier. The Navy Times confirms that Britain will order EMALS from the States rather than reinventing the wheel at home, which is probably a good thing. There have been some UK experiments along EMALS lines by the British arm of French heavy-'leccy firm Converteam, but Converteam is in the doghouse with the Royal Navy at the moment: the company supplied the all-electric drives of the new Type 45 destroyers, which have not been a success.

The US Navy has to take a punt on EMALS too, as the next American supercarrier (CVN-78, aka USS Gerald R Ford) has been designed around it and is now too advanced in construction to be modified for steam cats. Should EMALS not pan out, the USN will be saddled with the world's only hundred-thousand-ton nuclear helicopter carrier.

Friends of both the US and Royal navies will no doubt continue to watch the EMALS programme with interest. ®

The Royal Navy has been doing its best to overcome its current lack of carriers and Harriers in the Libyan campaign, instead inviting a group of the Army's Apache attack choppers aboard the assault ship HMS Ocean. The Apaches have been doing useful work in the skies above Libya, which they can reach just minutes after taking off (as opposed to the hours it takes for land-based RAF jets to fly in from Italy or - as they are still routinely doing - all the way from the UK). Long haul operations by the RAF are putting its air-to-air tanker fleet under serious strain, and it will not have escaped carrier fans that the just commencing PFI tanker deal is set to cost much more than the Prince of Wales and sister ship Queen Elizabeth combined.

Defence minister Liam Fox made a bizarre statement on the question to reporters yesterday, claiming:

"Harrier could not have carried the weapons we have used to such great effect. They are too heavy. Harriers would have been no help to us at all. The critics have been silenced."

The weapons used by the RAF so far have mainly been Paveway smartbombs and lightweight Brimstone anti-armour missiles, with a few dubious Storm Shadow air-launched cruise jobs mixed in (these latter missions are normally flown all the way from the UK).

The Harrier was the first British aircraft to be cleared for the latest Paveway IVs – the main weapon now in use by British planes over Libya – ahead of the Tornado and the Typhoon, as the RAF will tell you. It could also carry Brimstone. The Harrier GR9 could also carry Storm Shadow, supposing you actually wanted to.