We've seen all sorts of gadgets built from Lego and this wouldn't be the first piece of artillery either. However, this life-sized Gears of War assault rifle replica is far too impressive to ignore. 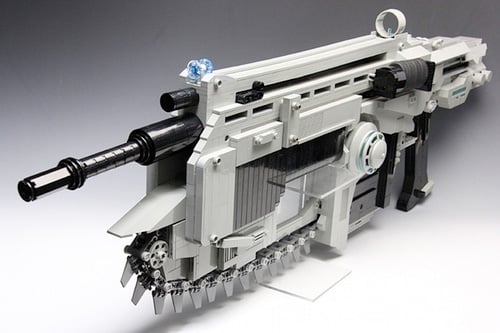 Construction chief Plum B is the artist behind the Lancer Assault Rifle, which fires rubber bands in both semi and fully automatic modes.

Not only does the gun present a slide-in magazine system and slicker cock-action than a night at the Playboy mansion, it features a built-in Lego chainsaw too, which can be fired up should the 'laccy ammo run low.

Quite a spectacular build to say the least. Check out the Gears of War gat in action:

If you'd like to learn how to make your own Lego firearms, check out Martin Hüdepohl's step-by-step guide, Badass Lego Guns. Only if you're gangster enough, of course. ®

Reach for the sky: Pixar founders win Turing Award for pioneering 3D animation – and getting rid of jagged edges

Daaa-aaad. She took my coding robot. No, I had it first