But what to do if one drops in to say goodbye?

First the good news: there are fewer Earth-threatening asteroids than previously thought. The bad news: there are still plenty of dinosaur extinction–sized globe crushers out there, awaiting their turn.

"The risk of a really large asteroid impacting the Earth before we could find and warn of it has been substantially reduced," said Tim Spahr, the director of the Harvard Smithsonian Center for Astrophysics' wonderfully named Minor Planet Center when announcing the results of a multi-year NASA survey.

You'll notice, however, that Spahr spoke only of the ability to warn of an impending extinction event – or even a smaller metro-mashing. He didn't say anything about doing something to stop an asteroid with mayhem on its mind.

Still, though, it's nice to know what's out there – and thanks to the latest development in the two-decade Spaceguard project, what's out there is a wee bit less threatening than boffins had feared. New estimates, well, estimate that there are "only" about 19,500 – not 35,000 – midsize near-Earth asteroids.

Unfortunately, we don't know exactly where most of those space rocks are – their number is an educated estimate, not a one-by-one census. 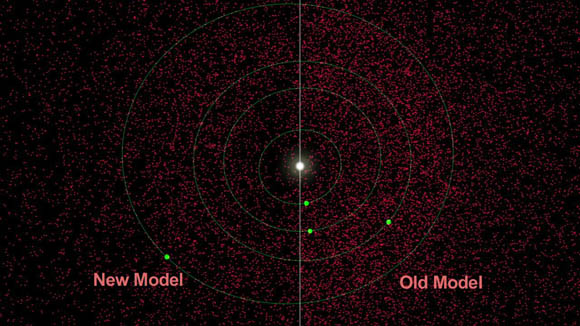 We have a far better idea of where the big boys reside. According to NASA estimates, there are 981 near-Earth asteroids of diameters of one kilometer and larger, and we've got tabs on 911 of them. Of those 911, NASA notes reassuringly, "None of them represents a threat to Earth in the next few centuries."

NASA also believe that it has the addresses and flight paths of each and every one of the massive 10-kilometer earth exterminators, kinsmen to the one that dropped by 65 million years ago to say goodbye to the dinosaurs.

Helping to provide this good news, and the star of Thursday's press conference announcing it, was NASA's Wide-field Infrared Survey Explorer, aka WISE, which was launched on December 14, 2009 aboard a workhorse 7000-series United Launch Alliance Delta II – in this case a three-booster, two-stage 7320.

Among its many duties, WISE has been surveying near-earth objects with its infrared cameras – "near-earth", in this case, being defined as orbiting within 195 million kilometers of the sun, a distance that includes Earth's orbit of about 150 million kilometers. This part of WISE's mission was called NEOWISE, for its near-Earth orbit focus.

"NEOWISE allowed us to take a look at a more representative slice of the near-Earth asteroid numbers and make better estimates about the whole population," the project's principal investigator Amy Mainzer says. "It's like a population census, where you poll a small group of people to draw conclusions about the entire country." 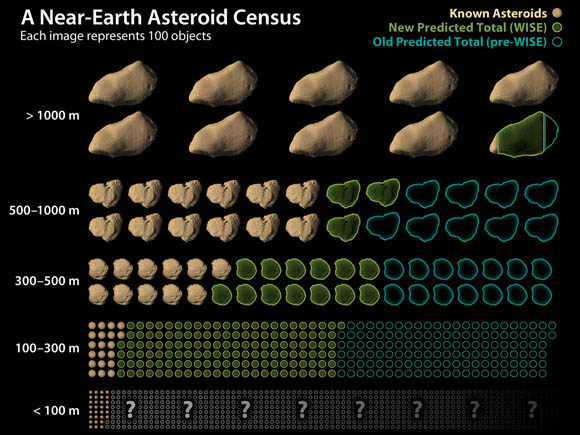 We've got a pretty good handle on the big fellows – the little guys, not so much (click to enlarge)

This census-taking has fulfilled a Congressional mandate to find 93 percent of the estimated population of one-kilometer-and-larger near-Earth asteroids. That goal was agreed upon between NASA and Congress in 1998, an outgrowth of the NASA Authorization Bill of 1991 and the Spaceguard Survey report of 1992.

That 1991 bill declared: "The House Committee on Science and Technology believes that it is imperative that the detection rate of Earth-orbit-crossing asteroids must be increased substantially, and that the means to destroy or alter the orbits of asteroids when they do threaten collisions should be defined and agreed upon internationally."

Thanks to NEOWISE, we're getting a handle on the first part of that declaration. The next step is accomplishing the second part, with or without Bruce Willis and Ben Affleck or Robert Duvall and Mary McCormack – or for that matter, Alf Blutecher and Olaf Fønss. ®