Exalytics is based on Oracle's Sun Fire X4470 M2 server, which debuted at the end of June. A four-socket box based on Intel's ten-core "Westmere-EX" Xeon E7 processor, it crams 1TB of DDR3 main memory and a mere six disk drives into a 3U rack chassis. The X4470 M2 is a perfectly respectable and competitive Xeon E7 server – but that's not what makes it an Exalytics appliance. 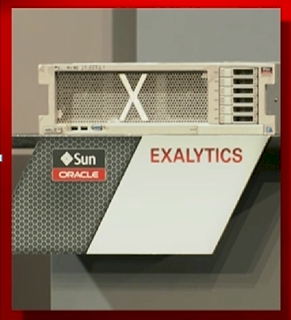 What transforms this server into an Exalytics appliance is its parallelization of the TimesTen relational OLTP and Essbase multidimensional OLAP databases, as well as parallelizing the analytics algorithms so that they run well across the 40 cores and 80 threads in the X4470 server – Oracle bought TimesTen in June 2005, and snapped up Hyperion, the creator of Essbase, in March 2007.

And then there's the fact that those databases are run in memory instead of on flash drives or, heaven forbid, disk drives. Hooking the box up to an Exadata OLTP/data warehouse appliance can extract data from production systems as end users hammer the Exalytics appliance with questions.

"Everything runs faster if you keep it in DRAM," Ellison said, stating the obvious.

But thanks to the compression algorithms that Oracle has cooked up on those in-memory databases, both of which were acquired by Oracle, and not developed in-house – about which Ellison has no shame.

The X4470 M2 server underlying the Exalytics appliance is able to have about 5TB of data in memory thanks to compression – although sometimes, depending on the data, you can get 10TB data into memory when the compression is really working well.

The machine can scan that in-memory database at about 200GB/sec, and you can hook it up to any Oracle database source with a Gigabit or 10 Gigabit Ethernet link, or to an Exadata through a 40Gb/sec InfiniBand link. 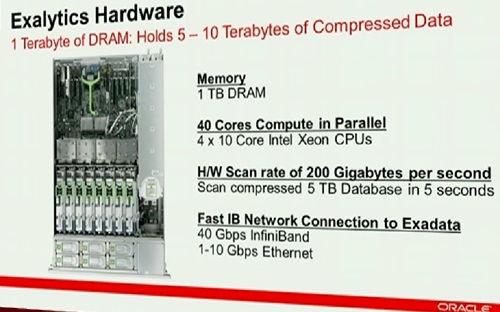 "To deliver data analytics at the speed of thought – faster than you can type – you have to change the interface because it moves so fast," Ellison bragged. "Before you finish asking a question, it can guess and give you the answer."

The TimesTen in-memory database is an option in the appliance, and it was originally tuned for high-speed transaction processing and had to be tweaked to do parallel query processing. Ditto for the Oracle Business Intelligence analytics tools and the Essbase multidimensional database.

In addition, Oracle grafted onto it its hybrid columnar data compression algorithms, borrowed from the Exadata storage servers that are at the heart of the Exadata appliances. These storage servers pre-process SQL queries on behalf of the Oracle 11g database running on database nodes in the cluster and also compress the data that is spread across flash and disk storage, depending on its relative hotness and coldness.

The Exalytics appliance also has what Ellison called an heuristic adaptive in-memory cache, which is just a way of saying that the appliance watches what queries people run and makes sure data sets are extracted from an Exadata appliance and kept there. Similarly, the results of commonly asked queries are stored in memory, not flushed, so they don't have to be run repeatedly.

In general, the business-intelligence tools can scan the entire database in memory in about five seconds, and most queries take around a second, Ellison said.

To give a sense of how much faster the Exalytics appliance is, Ellison threw up some charts showing how the OBI suite of tools running on similar Xeon-based iron performed without the TimesTen in-memory database and other parallelization tricks of Exalytics and running on regular Oracle 11g SMP nodes.

On multidimensional OLAP analysis using the in-memory Essbase implementation, response times showed about a factor of 16X reduction in response time for queries. When running Oracle's much more dense Enterprise Performance Manager application, which Ellison said had bottlenecks of its own, the speedup was about a factor of 5X improvement with 120 users hammering away on the system.

The system can suck data in from ERP systems as well as unstructured data such as emails or documents. "Whatever you want to analyze, you can compress and analyze," Ellison said, taking a jab at companies – such Autonomy (soon to be acquired by HP for $10.3bn – that sell software for analyzing unstructured data.

The Exalytics appliances are also aimed at IBM's own Smart Analytics Systems, which pair its InfoSphere data warehouse with its Cognos BI tools. Now, with Exadata and Exalytics, Oracle can sell one-on-one against Big Blue.

The question is why Oracle didn't put out an Exalytics appliance based on an eight-socket Xeon E7 box and double up the capacity. Maybe it is saving some powder for early next year?

Neither the price of the Exalytics appliance nor its shipment date were announced at OpenWorld. We'll try to find out more and let you know. ®