Dell building its own Exadata killer

OpenWorld Way back when, before Oracle bought Sun Microsystems, and even before Hewlett-Packard became hardware buddies with Big Red with the original Exadata Database Machine, Dell was Oracle's chosen buddy for running parallel Oracle databases using Real Application Cluster on top of Linux. But now Oracle is in the hardware business, and it looks like Dell is fixing to take the parallel Oracle database fight to Oracle.

In a keynote address that was mostly a commercial for Dell's Perot Systems consulting business, its Kace management tools, its Boomi cloud integration service, and its ServerWorks security service (all acquisitions), CEO, Michael Dell, who has given nine keynotes at OpenWorld thus far, dropped a few hints about the future PowerEdge 12G server lineup coming in the first quarter of 2012. Thank heavens, pass the iron. 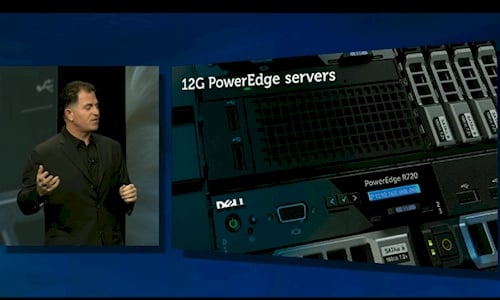 Dell, the man, said that Dell, the company, would launch its 12th generation of PowerEdge servers during the first quarter, as soon as Intel gets its "Sandy Bridge-EP" Xeon E5 processors out the door. Dell wasn't giving away a lot when he said that future Intel chips would have lots of bandwidth. As readers of El Reg know from way back in May, when we divulged the feeds and speeds of the Xeon E5 processors and their related "Patsburg" C600 chipset, that bandwidth is due to the integrated PCI-Express 3.0 peripheral controllers, LAN-on-motherboard adapters running at 10 Gigabit Ethernet speeds, and up to 24 memory slots in a two-socket configuration supporting up to 384GB using 16GB DDR3 memory sticks running at up to 1.6GHz.

But according to Dell, that's not the end of it. He said that Dell would be integrating "tier 0 storage right into the server," which is server speak for front-ending external storage arrays with flash storage that is located in the server and making them work together seamlessly. "You can't get any closer to the CPU," Dell said.

Former storage partner and rival EMC would no doubt agree, since it was showing off the beta of its own "Project Lightning" server flash cache yesterday at OpenWorld. The idea, which has no doubt occurred to Dell, too, is to put flash cache inside of servers but put it under control of external disk arrays. This way, the disk arrays, which are smart about data access, can push frequently used data into the server flash cache and not require the operating system or databases to be tweaked to support the cache. It makes cache look like disk, but it is on the other side of the wire and inside the server.

The other secret sauce that Dell is going to bring to bear to boost Oracle database processing, hinted Dell, was the system clustering technologies it got by buying RNA Networks back in June.

RNA Networks was founded in 2006 by Ranjit Pandit and Jason Gross, who led the database clustering project at SilverStorm Technologies (which was eaten by QLogic) and who also worked on the InfiniBand interconnect and the Pentium 4 chip while at Intel. The company gathered up $14m in venture funding and came out of stealth in February 2009 with a shared global memory networking product called RNAMessenger that links multiple server nodes together deeper down in the iron than Oracle RAC clusters do, but not as deep as the NUMA and SMP clustering done by server chipsets.

Dell said that a rack of these new PowerEdge systems – the picture above shows a PowerEdge R720, which would be a two-socket rack server using the eight-core Xeon E5 processors – would have 1,024 cores (that would be 64 servers in a 42U rack). 40TB of main memory (that's 640GB per server), over 40TB of flash, and would do queries 60 times faster than a rack of PowerEdge 11G servers available today. Presumably these machines also have EqualLogic external storage taking control of the integrated tier 0 flash in the PowerEdge 12G servers. ®