What lies beneath the Jules Verne submarine art?

Review The Fedora Project has released the first beta of Fedora 16.

Dubbed "Verne" and sporting desktop artwork that echoes Jules Verne's 20,000 Leagues Under the Sea Fedora 16 is shaping up to be a worthwhile alternative to Ubuntu 11.10, particularly for those that aren't happy with Canonical's home-brewed Unity shell.

Among the big changes in Fedora 16 is GNOME 3.2, the latest version of the GNOME 3 shell Ubuntu ditched for Unity.

Fedora has always been a reasonably popular Linux distro, but now it is acting as a kind of flagship for the GNOME 3 desktop, since Ubuntu has gone its own way. Fedora releases are likely undergoing much closer scrutiny from the Linux community. 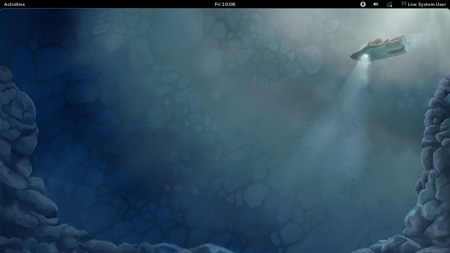 This first beta release is definitely rough around the edges, but if you want to check out the new GNOME 3.2, Fedora 16 is one of the best ways to do it. Indeed the main reason to install the new beta (something I suggest you do in VirtualBox) is to see how GNOME 3 is progressing.

This marks the second incremental update for GNOME and it is clear that there will be no new major features coming for some time. Instead the GNOME team has been focusing on polishing and improving the foundations of GNOME 3.

Perhaps the most noticeable of the smaller new features in this version of GNOME is the new integrated chat and messaging system that is now built in to GNOME. The new features mean you'll be able to automatically log in to your chat and messaging accounts without needing to launch a separate application. Thanks to a new set of notification options you'll be able to reply to messages, accept file transfers and even take calls, all from the GNOME shell.

The other fixes to GNOME 3's early pain points include a more permanent way to display the workspace switcher when you're in overview mode. In other words you can now actually get to the workspace switcher on the correct side of the screen when you need it. You also now get status bar notifications for external storage devices with options including mounting, browsing files or ejecting. Status bar messages can also now display a counter, for example to show the number of unread emails or new chat messages.

Perhaps more useful for those who would like to get real work done in GNOME 3 is the new "do not disturb" toggle switch in the user menu. While all the functionality of do not disturb mode is actually part of GNOME 3.0, there's no easy way to turn it on. Version 3.2 adds a switch in the user menu and, when enabled, do-not-disturb mode will set your messaging status to "busy" and stop the endless stream of notifications.

For those accustomed to GNOME 2.x, GNOME 3 is still a long way from comfortable. But, like KDE struggling from 3 to 4 before it, the GNOME team is slowly putting the bugs to rest and adding in the missing features. 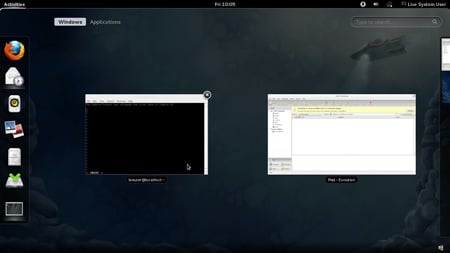 Fedora 16: more than just a showcase for GNOME

Fedora 16 will be more than just a showcase for GNOME. The distro has quite a few new tools in its own right, including the Linux 3.0 kernel. There has also been some talk of moving to the btrfs filesystem as the default for Fedora 16, but at least for now the beta (and the alpha before it) use ext4.

Also new is support for the GRUB2 bootloader on x86 systems, which replaces GRUB legacy.

There are also some application updates in the Fedora 16, including the latest version of Blender, a 3D imaging tool, the latest Firefox beta and the usual updates for Perl and Python. It's also worth noting that Fedora has not followed Ubuntu's lead in moving to Mozilla's Thunderbird for email. Fedora 16 is sticking with the Evolution email client.

For a complete list of everything that's coming in Fedora 16 (not all of which is in the current beta release) be sure to read the change list on the Fedora wiki.

Fedora 16 will be making the leap to GNOME 3 not just for the shell, but for all the underlying system tools as well. That means there will be no way to boot Fedora 16 into GNOME 2.x. There is a simplified "fallback" mode for hardware that doesn't measure up to GNOME 3's requirements, but effectively, from here on out, GNOME 3 is GNOME.

For those who've already made peace with GNOME 3, Fedora 16 is looking like one of the best ways to run the new shell environment. Not only is the default theme nicely integrated, GNOME 3 feels extremely stable on Fedora 16, even as a beta build. ®