Self-healing powers claimed if you play the magic card

CEO David Flynn said the current ioDrive technology was introduced four years ago and Fusion was now "introducing something that will toast it. This thing is a beast".

The ioDrives are PCIe-connected cards in half-length format and use NAND chips that are either single-level cell (SLC) or 2-bit multi-level cell (MLC) and require a 29nm to 20nm process (2Xnm). We think this is Samsung NAND using a 27nm process. There's a half-height ioDrive and a full-height ioDrive Duo to choose from.

The 2Xnm NAND is inherently slower than 3Xnm dies, but Fusion says its controller technology, including its firmware, more than compensates for this.

Flynn says Fusion can use the cheapest commodity 2Xnm dies and give it performance and endurance such that second-generation ioDrives out-perform first-generation products. There's no need, he says, to use enterprise-grade MLC (eMLC). 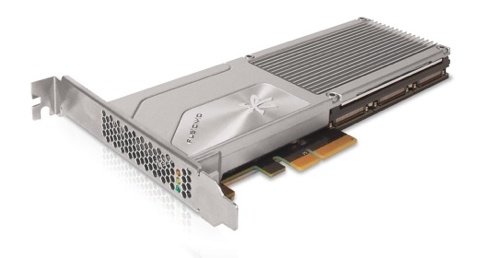 There is a new card design with the flash mounted on up to three daughter cards attached to the base card.

The SLC version of the larger format ioDrive 2 Duo has a 1.2TB capacity point and the MLC version 2.4TB. 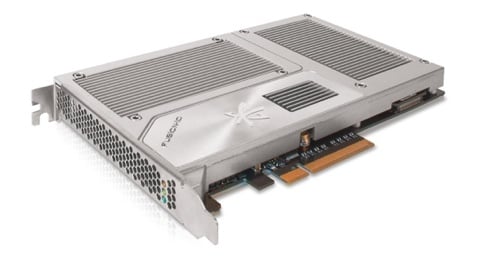 Flynn emphasises that the performance comes at low queue depth. Typically, he says, performance is quoted by suppliers with a high queue depth so that the parallelism in a product's controllers can really get the data moving. But real world experience is lower queue depths, because flash responds so quickly. Here Fusion's products speed along while competing ones, typically comprised of, he says, RAID controllers, SandForce controllers, and flash dies, start limping.

He also asserts that Fusion's products perform very well with mixed read/write workloads, whereas other products show a bathtub effect: high numbers for pure reads and writes but much lower ones for mixed workloads.

A Fusion spokesperson said: "The cards are only now going through performance tuning. In addition, we expect Intel's new Sandy Bridge processors to have a major beneficial impact since our design is built to leverage system processor improvements."