Oracle previews Solaris 11, due in November

OpenWorld If you expected Solaris 11 to be announced at the OpenWorld extravaganza taking over San Francisco this week, you probably weren't alone. But you're going to be a little disappointed, at least for a while. It won't be launched until sometime in November.

Solaris 11 was previewed by John Fowler, executive vice president of hardware engineering at Oracle. "Solaris 11 is a long time in development. It's a very important software release for us," he said, adding that he would not go through all of the features because he knew people would want to check out the launch of Apple's new iPhone 5.

Contrary to what many might be thinking, particularly after comments made by Oracle co-founder and CEO Larry Ellison two weeks ago, Solaris 11 will be enthusiastically supported on both Sparc and x86 platforms – and not just Oracle's own x86 platforms, but those made by others. (Hewlett-Packard and Dell are currently certified to run Solaris 10 and have OEM agreements with Oracle that were re-negotiated in the wake of Oracle's acquisition of Sun Microsystems for $7.4bn in January 2010.)

"We work very hard to make sure it works best on both," Fowler said.

Ellison's comment about the x86 racket during the company's conference call with Wall Street two weeks ago was Pure Larry.

"I don't care if our commodity x86 business goes to zero," he said "We don't make any money on it. We have no interest in selling other peoples' IP. Commodity x86 includes Intel IP, and Microsoft IP. We don't make money selling that. Sun sold that stuff, and we are phasing out that business. We have no interest in it whatsoever. We have interest in selling systems that include our IP. That's how we are going to drive the profitability of our overall hardware business – eventually."

Ellison was no doubt fired up about the impending Sparc T4 processor and server announcement, and perhaps exaggerating a bit, given all the x86 processors in its Exadata, Exalogic, Exalytics, and Big Data appliances.

"That of, course, generated a lot of calls to my office," quipped Fowler, who used to work for Sun co-founder Scott McNealy and therefore is familiar with CEO hyperbole for effect. So Fowler cleared the air. "We see Intel as a key building block," Fowler explained, adding that the company wasn't interested in being a distributor of commodity servers – something that Oracle has said since it took over Sun. "Our value is around enterprise capability. Don't think of us as a commodity play where you can run Windows or any commodity operating system."

In some cases, that will mean running Solaris 11 on Exadata or Exalogic appliances, which will be possible once Solaris 11 is shipping later this year. Solaris 11 Express, the development release preceding the production-grade Solaris 11, has already been shipping on these machines. Oracle has not said how many people have asked for Solaris 11 Express instead of Oracle's RHEL-ish Enterprise Linux.

Solaris 11 is a major upgrade to the former Sun Microsystems' variant of Unix and taking a little extra time is a good thing. But Oracle needs to get a goosed Solaris out the door soon because the future Sparc processors coming from Oracle and Fujitsu are going to have so many sockets, cores, and threads that Solaris 10 will not be able to span them.

Fowler said that the current Solaris 10 tops out at 512 threads and a few terabytes of addressable main memory. It is therefore not a coincidence that last year's top-end Sparc T3-4 server, which had 16-core Sparc T3 processors topped out at four sockets and 128 threads per socket. Given that thread count, if Oracle added more processor sockets, Solaris 10 would not be able to use them anyway. Ditto for main memory. To be fair, Oracle could no doubt have patched Solaris 10 to extend its thread count a little, but the company seems to be taking a longer view. That's something that a profitable Oracle can afford to do, and perhaps a barely profitable and sometimes money-losing Sun could not.

Fowler did not give the precise number of cores, threads, or memory capacity that Solaris 11 would span, but said Oracle took the time to rework the Solaris kernel with a new scheduler and a new I/O handler that would allow it to span tens of thousands of CPUs, hundreds of terabytes of main memory, exabytes of storage, and hundreds of gigabits of networking bandwidth. (In past presentations of the Sparc/Solaris roadmap, Fowler showed the design goal of a future Sparc system due in late 2014 or early 2015 as spanning 64 sockets in a single system image with a total of 16,384 threads and supporting 64TB of main memory.)

Solaris 11 has support for the dynamic threading implemented in the new Sparc T4 processors, launched last week, and also sports a latency-aware kernel memory allocator, an optimized shared memory stack, a parallel network stack, adaptable thread and memory placement, and enhancements in NUMA I/O (which will be important in future Sparc T series machines, presumably). The scheduler is aware of the different possible topologies in both x86 and Sparc systems and has NUMA-aware kernel memory fan out

One of the things that probably took some extra time was doing optimizations in Solaris specifically for Oracle software, which Fowler touched on here: 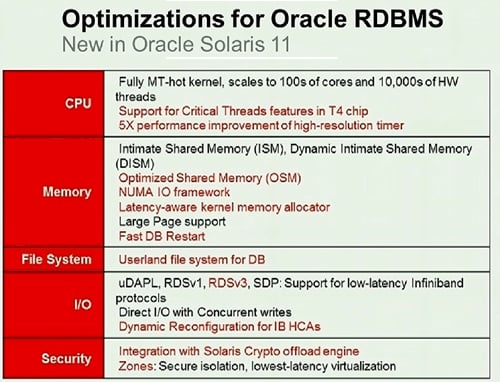 Solaris 11 optimizations for the Oracle database

The other thing that Oracle has been doing to prep for the Solaris 11 launch is to figure out ways to make the upgrade easier. Fowler said that in the past, the move from Solaris 9 to Solaris 10 was more of a "classic forklift upgrade," and that "the idea here is that adopting an operating system should not be a traumatic event" but something you can do "in an unflustered way."

Solaris 11 will, for instance, have one button rollback features so if customers don't like the results of their upgrade to Solaris 11, they can go back. Ditto for patching once you are on Solaris 11. The system will also include telemetry back to Oracle, which will babysit your Solaris 11 upgrades and offer guidance on how to proceed and feed data back into the Solaris engineering and support teams.

This is, by the way, what Oracle has been moving towards internally since acquiring Sun and adopting Sun iron and systems software to run its business. The server and operating engineering teams at Oracle are hooked into the Oracle IT team, and they both have the same boss – Ellison – and that means the feedback loops are small and fast. "This is way beyond eating out own dog food," said Fowler. "This is using Oracle to make the products better."

Fowler also said that 600 customers had Solaris 11 running in production already. Presumably he meant actual Solaris 11, not Solaris 11 Express. And he reminded OpenWorld attendees of Oracle's compatibility guarantee for Solaris applications: "Your applications will run on 11 or it is my problem."

Now you know who to call if yours don't. ®