The iPhone 4S in depth: More than just a vestigial 'S'

Fanbois, shake off your 'No iPhone 5' anguish

As marketing headman Phil Schiller ate up more and more minutes of Apple's "Let's talk iPhone" event, waxing rhapsodically about the new iPhone 4S, it became increasingly clear to those in attendance that the iPhone 5 wasn't going to make an appearance.

Not that The Reg was there to take the pulse of the crowd. For reasons best known to Cook & Co., your humble Reggies are personae au gratin at One Infinite Loop.

Locked out of the event hall, we struggled instead to find a working live-blog feed, settling on a sputtering Ars Technica and a stumbling Engadget as the best of the self-immolating lot that we tried.

But despite the glaring limitations of this newfangled "internet" thing, we were able to learn from those live-bloggers' reports that Schiller was valiantly attempting to paint the iPhone 4S as a Real Big Deal™ – and that he pulled it off better than might have been expected, considering all the pre-event hype about the iPhone 5.

The iPhone 4S looks for all the world like an iPhone 4 – which has case-manufacturers rejoicing – but Schiller's promise that "inside it's all new" may rightly be considered a wee bit of an exaggeration. That said, the iPhone 4S does included a number of welcome upgrades from its immediate predecessor.

Take, for starters, its A5 processor, which is either identical or substantially similar to the processor powering the iPad 2 – Apple, as is their wont, didn't say. Schiller claimed that the A5's overall performance was up to two times as fast as the A4 in the iPhone 4, with graphics performance being up to seven times as fast.

Seeing as how the iPhone 4S won't be available until October 14, we have nothing substantive to say about Schiller's claims. Neither can we verify his reports of solid battery life for the 4S. But comparing the performance and battery life of the single-core A4-equipped iPad to that of the dual-core A5-equipped iPad 2 looks promising. 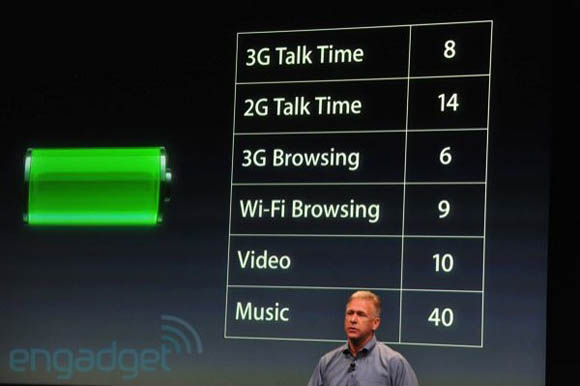 Speaking of comparisons, and seeing as how the iPhone 4S appears to have not changed the antenna design that led to the "Antennagate" dust-up over the iPhone 4, Schiller went out of his way to point out that the iPhone 4S has a different antenna system than did the iPhone 4.

"Our engineering system has worked really hard at advancing the state of the art," Engadget quoted him as having said. "It can now intelligently switch between the two antennas between transmit and receive."

Now, exactly what technology is behind that claim is of course not the subject for a mass-consumption product-rollout pitch, and Schiller didn't break that marketing rule. We'll be anxious to hear exactly and specifically what Schiller was talking about as time goes by.

He did, however, claim that this "state of the art" antenna-switching will improve both call quality and data-download speed. Schiller says that the 4S will support data rates of 14.4Mbps down – double that of the iPhone 4 – and 5.8Mbps up, matching that of the iPhone 4.

He then displayed a slide that compared iPhone performance to that of other HSDPA "4G" phones, showing their up and down speeds matching those of the iPhone 4S. "The iPhone 4S is just as fast as these phones," he said. 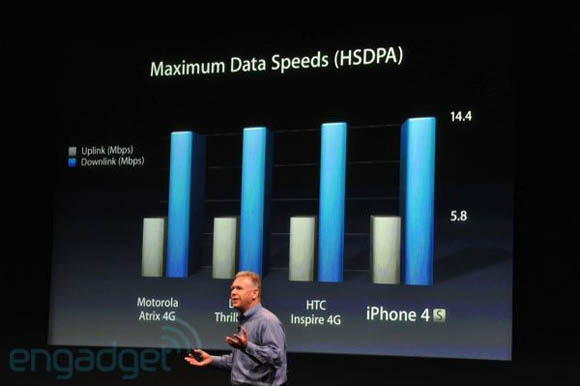 Apple reserves the right to reserve the term "4G" for the foreseeable future (source: Engadget)

We're not going to get into a debate as to exactly what "4G" means – as we discussed last week, there's more than enough marketing mumbo-jumbo to go around in that debate.

We will, however, be willing to place a small wager that one of the reasons Apple is not jumping on the 4G bandwagon with the iPhone 4S is that they plan to make that marketing move with the iPhone 5, whether that (eventual) phone is based on LTE, HSPA+, or – a vanishingly small chance – WiMAX.

And speaking of alphabet soup, one nice feature of the iPhone 4S is that it's both CDMA and GSM-capable. While that may not mean much to folks who don't travel much, if you happen to hop from country to country, the ability to switch protocols is a real convenience.

Cutting the number of iPhone 4S SKUs in half is also a big plus – but more to Apple than to consumers.

Next page: Camera improvements: from wretched to ...?
Page: