When Jobs landed at Apple in early 1996, he came without a title any more specific than "adviser" and without any duties more-defined than "advising" – a minister without portfolio, as it were. But that didn't stop him from remaking Apple into a company more to his liking.

However, despite all the buzz of a "palace coup", the lack of faith in Amelio by many Apple staffers, and the desire by many throughout Silicon Valley for him to take over, a BusinessWeek article from that period quotes Jobs as saying: "People keep trying to suck me in. They want me to be some kind of Superman. But I have no desire to run Apple Computer. I deny it at every turn, but nobody believes me."

Technically, Jobs may not have been running Apple, but he was certainly influential. He convinced Amelio to starve Sculley's pet project, the Newton. He talked Amelio into revamping his executive staff, and in 11 weeks, half of the eight were Jobs' recommendations, including Jon Rubinstein running hardware and Avie Tevanian running software – both of whom had worked with Jobs at NeXT. 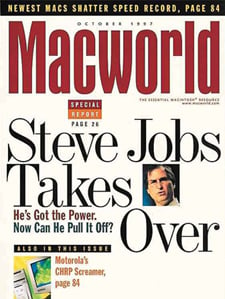 Then on July 9, Apple's board of directors showed Gil Amelio the door, a move that The New York Times called an "abrupt ouster" that "casts doubt on whether the company that pioneered the personal computer industry can be revived". Hancock resigned along with him.

When making their announcement, the Apple board said that Jobs would take a larger role. They had offered him the position of CEO, which he declined, saying that he already was a CEO – at Pixar – and that one CEO position was enough. He did, however, agree to join the Apple board.

Jim McCluney, Apple's operations chief, told BusinessWeek of Amelio's good-bye and Jobs' hello. McCluney said he was called to a meeting with Amelio and Apple's top execs. "Well, I'm sad to report that it's time for me to move on," Amelio said. "Take care." And with that, after being Apple CEO for merely 17 months, Amelio left the room. 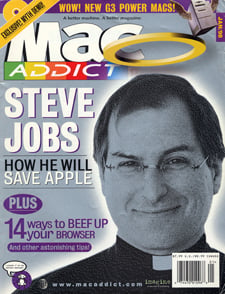 Soon afterwards, Jobs revealed what most observers had surmised when 1.5 million shares of Apple stock hit the market in June: those were the shares that Jobs had been given in the NeXT deal – he had sold them immediately after the six months for which he had agreed to hold them.

"Yes, I pretty much had given up hope that the Apple board was going to do anything. I didn't think the stock was going up," Jobs told Time magazine. "If that upsets employees," he added, "I'm perfectly happy to go home to Pixar."

That sale, however, turned out to be not the wisest financial move. Apple's stock shot up in August after Jobs made his most important announcement by far during his short tenure at Apple: a partnership with Microsoft.

On August 6, Jobs took the stage at Macworld Expo in Boston, and told the crowd of Apple fans that Apple and Microsoft had settled their long-running "look-and-feel" patent dispute, that Redmond had purchased $150 million in non-voting Apple stock and agreed not to sell it for a minimum of three years, and most importantly, Gates and co. had promised to continue support for Microsoft Office on the Mac for five years.

At the time, fanatical Apple fanbois considered Microsoft the Evil Empire and Bill Gates the Great Satan. And Jobs hadn't exactly done his best to quell that sentiment. For example, in the 1996 documentary Triumph of the Nerds, he had said: "The only problem with Microsoft is they just have no taste. I don't mean that in a small way. I mean that in a big way, in the sense that they don't think of original ideas and they don't bring much culture into their products."

Jobs was not alone in that belief, and so after he announced the Microsoft deal at his Macworld keynote there were more than a few boos when Bill Gates appeared on a giant screen behind Jobs in a satellite feed – but those boos were drowned out by the applause of the more-rational Mac lovers in attendance who understood that an endorsement by mighty Microsoft was exactly what Apple needed. 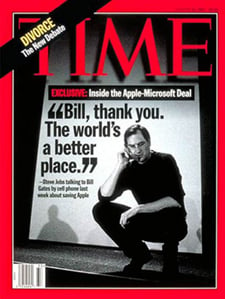 Jobs also noted that "if we screw up and we don't do a good job, it's not somebody else's fault. It's our fault".

And he told a reporter from Time magazine that screwing up was very much on his mind. "Apple has some tremendous assets," he said, "but I believe without some attention, the company could, could, could – I'm searching for the right word – could, could..." Pause. "Die."

Jobs wasn't alone in his worries. Michael Dell, when asked what he'd do if he were running Apple, famously told an ITxpo97 crowd in October of 1997: "What would I do? I'd shut it down and give the money back to the shareholders."

Next page: The iMac enters the matrix
Page:
Corrections Send us news
65 Comments