At first, Jobs and Sculley were a powerful team, dubbed on the cover of an October 1983 BusinessWeek as "Apple's Dynamic Duo". It didn't last.

Soon after its showy introduction, it became apparent that the Macintosh was not going to be the instant hit that Jobs had predicted. Plagued by a 128KB memory allotment – low even for that time – plus a lack of expandability, no hard drive, and other limitations, it failed to attract a critical mass of software developers.

It didn't help, either, that the Mac's graphical user interface was unfamiliar to the developer community – although there was one young, up-and-coming developer who thought the Mac was worth investing in: Bill Gates.

Mac sales tanked. Jobs reportedly blamed everyone but himself – including Sculley – for the apparent failure of his pet project.

He also made the strategic error of alienating both his once-friend Steve Wozniak and the company's Apple II team – still responsible for the bulk of the company's revenue – by ignoring the company's one successful product during an annual meeting.

Wozniak quit Apple - loudly. According to iCon, Wozniak tore into Jobs and his supporters during his resignation, saying: "We had a shareholders' meeting last week and the words 'Apple II' were not mentioned once." Jobs was running out of friends at Apple.

Jobs then made another strategic error by attempting to work behind Sculley's back to get him fired. The machinations involved in his struggle with Sculley and his supporters were complex and many-layered – and the stuff of legend – but in the end Sculley won.

At the end of May 1985, Sculley convinced Apple's board of directors to remove Jobs as general manager of the Macintosh division and deny him any day-to-day operating role in the company – although he was allowed to retain his position as board chairman. Jobs described Sculley's withdrawal of support as being like when "somebody punch[es] you in the stomach and it knocks the wind out of you and you can't breathe". 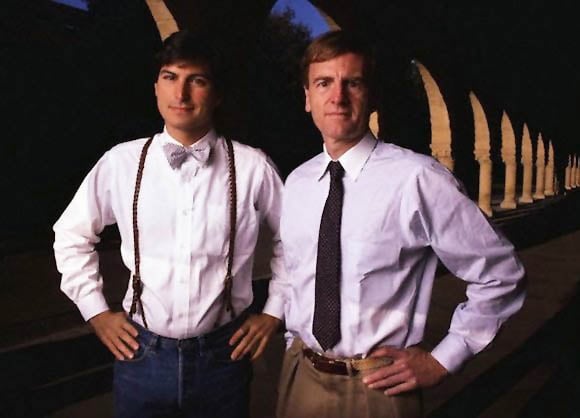 On June 1, in an article entitled "Apple Co-Founder Jobs Demoted", the San Jose Mercury News reported that Apple said Jobs would take on "a more global role in product innovations and strategies".

After being "demoted", Jobs spent some time in Europe, and when he returned to Cupertino he was asked to move out of his office to a separate building he nicknamed "Siberia", where he pondered his next move. Pun intended.

"I went for a lot of long walks in the woods and didn't really talk to a lot of people," Jobs said about the period ofter his exile to Siberia. But then he began to quietly put together a team of Apple senior engineers to launch the company that eventually became known as NeXT.

On August 15, 1985, Apple's stock was at its lowest point in its history, before or since, closing – when adjusted for three splits since – at $1.8125. In September 1985, after another bout of internecine warfare with Apple management, Jobs tendered his resignation.

In early 1986, Jobs finished selling off all but one of his shares of Apple stock. He kept that single share, he is said to have commented, in order to keep receiving the company's annual reports.

In an interview with Bloomberg Businessweek on October 20, 2010, John Sculley said: "Looking back, it was a big mistake that I was ever hired as [Apple's] CEO."