HP thinking too much about Autonomy

If you want Big Blue to buy your software company some day, you can increase the odds by moving it near Toronto – that location just did the trick for Platform Computing.

The center of gravity for IBM's Software Group, excepting its operating systems, is centered around the Canadian industrial and financial capital, and has been for decades. Big Blue has bought so many software companies established in the area that it is hard to keep track of them – and, of course, its own Toronto Software Labs is IBM's third largest software facility and where its DB2 database, Rational development tools, Tivoli systems management tools, and myriad WebSphere products are crafted.

Starting today, with the absorption of cluster management software pioneer Platform Computing, IBM is borging 2,000 customers and 500 people who know cluster and cloud management – including high-speed messaging for financial systems – better than any other group of people on the planet.

Like Platform Computing, IBM's Toronto Software Lab is also based on Markham, Ontario, so it looks like the commute for all those new workers won't change much.

The mystery, of course, is why HP – which actually partners with Platform Computing for some of its management tools – didn't snap up the smaller Markham company first. Like, years ago.

HP's former CEO, Leo Apotheker, wanted to make a big deal that would show he was serious about software, and thus the $10.3bn acquisition of British software firm Autonomy. That deal also emptied HP's coffers, which was not exactly bright, and new HP CEO Meg Whitman has to say the Autonomy deal was the smartest thing for HP to do (the deal was completed last week) or else the company will face swarms of lawsuits for bad management.

In typical marketing-speak, IBM says that it is buying Platform Computing to goose its Smarter Planet initiatives as well as to increase its sales in the high performance computing and cloud arenas.

Platform Computing has key partnerships with Dell, Red Hat, and HP and it seems likely that Big Blue will maintain these. But these partnerships may not come to much. Dell looking to use its acquisition of RNA Networks to make clusters to support parallel databases and perhaps clouds and more traditional HPC work when this gets mixed up with its Scalent Systems acquisition from July 2010. Red Hat is focusing on a whole different stack of open source tools called Aeolus for its cloudy and messaging platforms. And HP is basically distracted.

What IBM is getting for whatever it is paying for Platform Computing is an installed base of customers who use its message passing interface (MPI) software (acquired from HP and Scali) as well as its Platform cluster management and Symphony financial services grid software, which is designed to make Java apps run like a bat out of hell on clusters and is often used by financial institutions as a platform for running risk analysis applications.

And, maybe even more significantly in the long run, IBM is getting its hands on a variant of the Symphony grid called Platform MapReduce, which has been tweaked to run Hadoop MapReduce applications atop the Symphony grid. 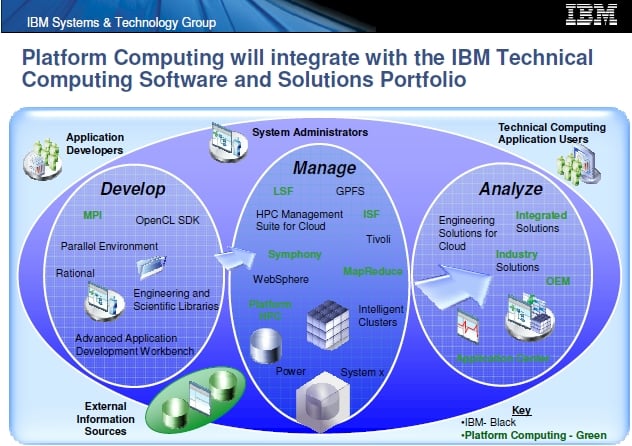 The meshing of IBM and Platform Computing tools (click to enlarge)

Perhaps the most important thing about Platform Computing is that its most valuable code is not open source, which means what IBM bought was not only the brains and feet of those 500 employees, but control of the code behind LSF, ISF, and Symphony.

IBM expects the Platform Computing acquisition to close before the end of 2011. The company will be tucked into its Systems Software division, under general manager Helene Armitage, which sits inside the behemoth Systems and Software Group, which is run by Steve Mills.

Platform Computing was founded in 1992, and is based on work by Songnian Zhou in his Ph.D. thesis at the University of California at Berkeley from 1987, and with cofounder Jingwen Wang, who also worked on load sharing in distributed systems.

LSF 1.0 was announced in 1992 and was quickly adopted as the workload scheduler for clusters at Nortel, Pratt & Whitney, and the Los Alamos National Labortatory. Two years later, chip makers Advanced Micro Devices and Texas Instruments added LSF to their electronic design clusters. HP partnered with Platform Computing in 1995, Silicon Graphics in 1998, and IBM and Compaq in 2001. Dell and NEC jumped on board in 2002, Microsoft and Oracle a year later, Red Hat partnered with the company in 2007, and Fujitsu got around to it in June of this year.

Platform Computing's various tools manage more than 5 million processors (by which is presumably meant CPU sockets) worldwide. The company was self-funded and profitable through its first 15 years, but has not released its financials or done any bragging lately to say how the past four years have been. ®