It overtook Windows XP in the first ten days of October with a 40.18 per cent share of the market, according to statistics gathered by Statcounter. At the latest measurement, 38.66 per cent of desktop computers in use online are powered by XP while Vista limps in on 11.21 per cent.

XP became the most popular operating system by quantity in 2003 after being released in 2001. Windows 7 adoption has been quick since it hit the shelves in 2009.

What's obvious from the Statcounter charts is the fact that Win 7 has grown at the expense of XP and Vista.

Still, with Mac OS X only commanding 7.27 per cent of the market, it’s not surprising that Microsoft is retaining customers rather than luring new ones. Linux, on the desktop, has all but flatlined. 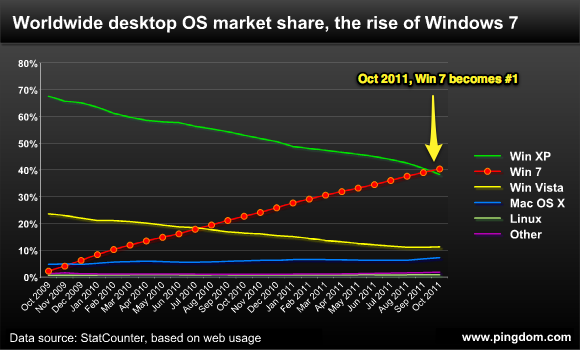 Microsoft reported in September that it had sold 450 million Windows 7 licenses, and suggested that Windows 7 PCs now outnumbered XP ones without stating any back-up figures. This external beancount from Statcounter suggests that Redmond truly has passed the tipping point.

Statcounter measures traffic to websites - approximately three million of them - and records the operating systems that visits come from, so their counts only measure computers that are connected to the internet. It can’t be proved that the web visiting figures exactly correlate to the physical installed base of desktop operating systems, but it is a handy indicator to have.

Meanwhile in the land of mobile device operating systems, SymbianOS held 29.5 per cent, iOS held 23.18 per cent, Android held 21.63 per cent and BlackBerry OS held 9.52 per cent, according to Statcounter. ®

After a long and surprisingly varied dynasty, it's possible they're all FOSS now
OSes4 Aug 2022 | 122