Since the end of September, a small – but growing – group of protestors has set up camp outside the Federal Reserve Bank building on San Francisco’s Market Street to demonstrate against corporate greed, government inaction, and the squeezing of the middle and lower classes.

The Occupy movement currently claims encampments in over a dozen US cities and continues to spread, with the London Stock Exchange the next target on Saturday. But unlike your standard demo, the occupiers rely on the internet to get their message across, provide protection for demonstrators, and to counter the deafening barrage of silence from much of the media – which is such a contrast to the acres of coverage at Tea Party events.

The US media only really started to cover the protests about two weeks after they started, after video footage of police teargasing non-violent protestors on Wall Street was broadcast around the world.

The videos were up on YouTube within hours, and forced people to recognize that there was a protest going on, with mainstream commentators castigating the police for their attitude. The Register spent Thursday morning chatting with the volunteer admins who maintain the city’s most ad-hoc computer network, to see how they were managing to pull it off.

Pedal power to the people

The key problem for the group is power. At present the OccupySF crew is keeping systems running almost entirely on pedal power. A bicycle generator donated by Rock the Bike runs 24/7, with volunteers usually lasting 30 minutes before handing off to the next fresh set of legs.

The electricity thus generated runs into three car batteries to maintain a backup power supply, but the amount of juice that a single bike can generate is only enough to power a single laptop. 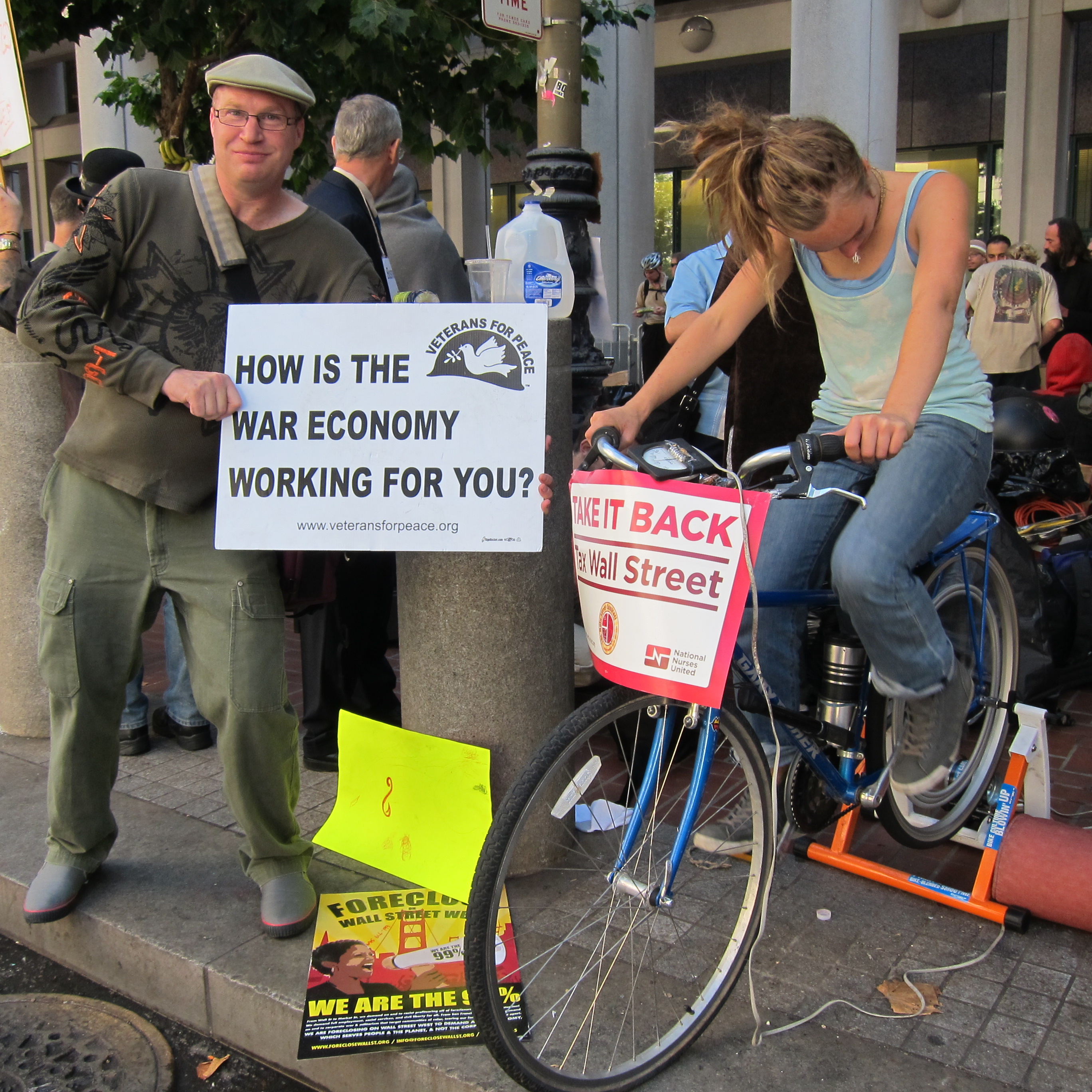 To deal with the power famine, the protestors have devised some interesting hacks. The batteries are about to be shifted into a dedicated shopping cart, giving the group more mobility. Recent rainstorms have also proved a problem.

But with the admins trying to power both phones and batteries, power conversion has become a major issue. The group were having to run a 12 volt supply, convert it to 150 AC and then back down to five volts for phones and the portable radios used to maintain emergency contact.

The conversion process is highly inefficient, however, and the admins reckon they were losing over half the available power in the process – power that literally cost blood, sweat, and tears from the peddlers.

However, one bright spark managed to cobble together a new converter that downstepped the 12 volt supply directly to five volts much more efficiently, using mail-order parts and a bit of ingenuity.

“Another bike generator or two would be really useful,” said one of the admin team. “If we had that we’d be rocking and could build a system that would revolutionize the way these protests work.”

To keep the power running, the OccupySF group needs some tools from outside. There’s a crushing shortage of inverters, and more batteries for power storage and dispersal would also be useful, they told us, but the real need is for more computers.

The encampment has a rolling population of second-hand netbooks, laptops, and tablets, strung together with ad hoc networking, and carefully power managed. For what some in politics and the media are portraying as feckless dropouts, the protestors are almost religious about saving power: users check their email, slurp some juice into their phones, or post material online, and then shut down as soon as possible to save power for others.