The Hubble Space Telescope has taken a 19-hour snapshot of galaxies whose images have been warped by the presence of the baffling interstellar substance known as "dark matter", residing in an intervening galactic cluster.

The image, released Thursday, shows the cluster – known prosaically as MACS J1206.2-0847, or simply MACS 1206 for short – distorting the appearace of other galaxies as if they were reflected in a cosmic funhouse mirror. 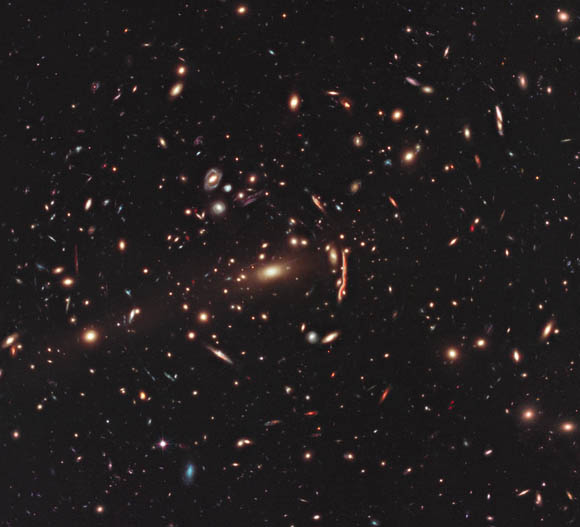 The distortion is caused by gravitational lensing, the bending of spacetime by a massive gravitational force that causes light from galaxies to slip-slide through the distortions and come out on the other side – the side from which we're viewing MACS 1206 – making the galaxies appear to be twisted out of shape.

Hubble scientists explain that what makes MACS 1206 so massive is that it contains an enormous – one might even say astronomical – amount of the as-yet-unexplained substance, dark matter.

Being, well, dark, dark matter cannot be seen – its existence can only be inferred from how it warps spacetime. In the case of MACS 1206, the warping is extreme, indicating that MACS 1206 is one hefty cluster, indeed.

We have no freaking idea of exactly what dark matter is, but we do know that there's a lot of it – estimates of its percentage of the total matter in the universe hover around the mid-to-high 90s. Nor, for that matter (no pun intended), do we yet have an inkling of the identity of its compatriot, dark energy, the force that's causing the expansion of the universe to accelerate.

We do know, however, that dark matter's massiveness warps spacetime, one effect being the production of multiple images of the same celestial object – the Einstein Cross is perhaps the best known example of this effect.

The Hubble image, for example, includes 47 multiple images of 12 newly identified distant galaxies, as well as the distorted images of others, as seen in the photo, above.

The image was produced as part of a project called "Cluster lensing and supernova survey with Hubble", or CLASH, which is performing a multiwavelength survey – ultraviolet to near infrared – of 25 such clusters, using the Hubble's Advanced Camera for Surveys (ACS) and Wide Field Camera 3 (WFC3).

According to Hubble scientists, it's not known exactly when such clusters were formed, although it's thought to be somewere between nine and twelve billion years ago. If the CLASH survey discovers that most of the clusters it surveys have as high a concentration of dark matter in their cores as does MACS 1206, they might discover some new info about the early days of our universe.

The Hubble astronomers also note that as fine an instrument as their Space Telescope may be, its follow-on – the James Webb Space Telescope – will provide far more clarity in the hunt for our origins and the structure of our universe.

That is, if the Webb is ever completed. Last month it survived one attempt to deep-six it, but in the current US political climate, its multi-billion-dollar price tag makes it a prime target for many a headline-seeking budget-cutter's axe. ®