And more Power7 cores for the Power 780 beast

If you are a user of an entry or somewhat biggish Power Systems server and you are memory or I/O constrained, then IBM has some new Power7 machines it wants to sell you. If not, the company is perfectly happy to sell you the existing Power7 machines, which don't support as much main memory and which only use PCI-X and PCI-Express 1.0 peripherals.

On Wednesday, as rumored, IBM did indeed put out new systems – but they are not based on the Power7+ chip, but instead existing Power7 processors. Some are running at the same clock speeds as those used in the machines they replace, and some are running a tad bit faster thanks to better yields on the 45 nanometer process Big Blue uses to etch the eight-core Power7 processors.

The updated Power 710 and Power 730 servers come in the same 2U chassis that their older siblings and near twins were wrapped in when they were announced in August 2010.

The new Power 710 has a single Power7 processor and eight DDR3 main memory slots running at 1.07GHz. Unlike the older 710 model, it supports 16GB memory sticks and therefore tops out at 128GB instead of 64GB. The machine also has five x8 peripheral slots, instead of four, and they run at the faster PCI-Express 2.0 speed that most servers use these days – we will start the PCI-Express 3.0 cycle once Intel formally launches its "Sandy Bridge-EP" Xeon E5 processors sometime next year.

These PCI gen-2 x8 peripheral slots operate at 20Gb/sec of bandwidth, twice the gen-1 slots. The old and new Power 710s offer the same processor options: a four-core chip running at 3GHz, a six-core running at 3.7GHz, and an eight-core at 3.55GHz.

The Power 730 that is based on the same chassis comes with a two-socket processor card that can support up to 256GB using the 16GB sticks, and has four different processor options, which have to be added in matched pairs: four-core 3GHz, four-core 3.7GHz, six-core 3.7GHz, and eight-core 3.55GHz. The chassis has room for six 2.5-inch drives.

The updated Power 720 machine comes in a 4U chassis with room for eight 2.5-inch disks and has the same five PCI-Express 2.0 slots. It's a single-socket machine, and it can only be configured with Power7 chips running at 3GHz; customers can choose a processor with four, six, or eight cores. The entry four-core version does not have a 12X I/O loop (a modified InfiniBand 20Gb/sec link) to hook to remote storage bays, but the ones with six or eight cores do. The new Power 720 tops out at 256GB of main memory using the 16GB sticks.

The Power 740 can be configured with one or two system cards, each with one processor, and offers four different Power7 processor options: four-core running at 3.3GHz or 3.7GHz, six-core at 3.7GHz, and eight-core at 3.55GHz. You can add one processor at a time, but the second one has to match the first one when you get around to putting it in.

Each processor card has a single 12X remote I/O slot and supports 256GB of main memory, twice what last year's Power 740 could do. The machine supports five PCI-Express 2.0 x8 slots, and with optional PCI-Express drawers hanging off that 12X loop, you can add another 40 PCI-Express 2.0 slots to the system.

In addition to the fatter memory and PCI boost, these four machines have a dedicated slot for a dual-port Gigabit Ethernet LAN controller. Nothing else can plug into this slot.

On the Power 770, IBM is goosing the speeds on the Power7 processors a bit, much as it did with the Power 750s in April this year. The Power 770 machine is made up of four two-socket servers that are lashed together with a NUMA chipset that creates an eight-socket, shared memory system.

Last year's models used six-core Power7s running at 3.5GHz or eight-core chips running at 3.1GHz. In the new Power 770, the six-core chips are revved to 3.72GHz and the eight-core versions spin at 3.3GHz. The maximum memory on this machine is doubled to 4TB using 16GB memory, and the server nodes now have six PCI-Express 2.0 x8 peripheral slots. 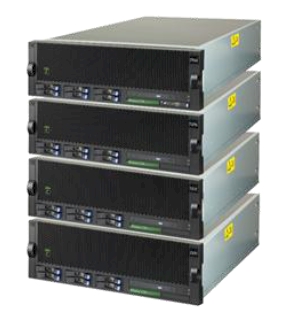 As part of the Power7 launch in February 2010, a special version of the four-chassis Power 770, called the Power 780, was created with a dual-boot mode that allowed for half of the cores to be turned off on reboot and the chip clocks to run slightly higher. This also allowed the 32GB of embedded DRAM L3 cache to be carved up by half as many processor cores. For a lot of workloads (such as database processing), the doubling in L3 cache and slight clock speed boost per core can result in a machine that does significantly more work.

With the new Power 780 launched this week, IBM is shifting the Power 780 to four sockets from the previous two and plunking in six-core chips. So the top-end model has 96 cores, running at 3.44GHz. The 64-core model, which is based on eight-core processors, also was tweaked, with cores that run at 3.92GHz with all cores on (a little higher than the 3.86GHz of last year's model) and at 4.14GHz with half the cores deactivated (the same as the prior machine). Memory capacity on the two new Power 780 variants is doubled to a max of 4TB.

Why not push the Power 780 all the way to 128 cores and use full eight-core Power7 chips? Because that would interfere with Power 795 sales, and IBM charges a nice premium for processors, memory, and software on those boxes.

The Power 795s scale up to 32 sockets, 256 cores, and 1,024 threads as well as up to 8TB of memory. IBM's AIX 7.1 and Red Hat and SUSE Linuxes can span those cores and threads in a single image, but Big Blue's own IBM i (formerly OS/400) operating system peters out at 32 cores and 128 threads without special patches.

Incidentally, neither the Power 750 nor the Power 795 were updated with double memory or PCI-Express 2.0 peripheral slots. Steve Sibley, director of product management for the Power Systems line at Big Blue, tells El Reg that the company determined that these machines didn't need the I/O or memory upgrades right now. The Power 750 already supported 512GB of memory using 8GB sticks, and it is highly unlikely that IBM has many customers clamoring for 16TB Power 795s.

The new Power Systems will be available on October 21. Pricing in the base machines is exactly the same for the entry Power 710, 720, 730, and 740 machines – and this is so by intention, says Sibley, to make it possible for IBM's sales reps and channel partners to focus on selling both types of machines.

If it were me doing the buying, I would either demand a box that can support the faster I/O and fatter memory or demand a price cut if I was buying the older box from last year. ®