Dell World Texans have a certain swagger, and today in the Austin Convention Centre it was Dell's turn to sashay onto the stage. EMC World, Symantec Vision, Dell World, NetApp Insight - the single-vendor trade shows give corporates a catwalk on which to strut their stuff, and Michael Dell strode out to walk the walk and talk the talk as behoves the CEO of a $30-plus-billion corporation.

The warm-up music shook the seating to its foundations as the audience wandered in with hands full of taco breakfast rolls and coffee cups, eager to hear from the world's biggest PC box shifter turned end-to-end enterprise IT solutions supplier. A horde of corporate tweeters had smartphones and notebooks at the ready, keen to broadcast the great man's soundbites faster than neutrinos escaping from CERN. 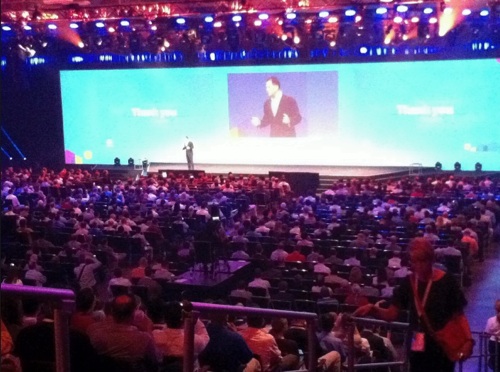 On he walked, besuited and tieless, and did his excellent stuff. Dell is a plain-speaking man with a common touch... despite that aura of being a billionaire. Customers and channel partners rush to have photographs taken of themselves with him; Hey, that's me with Michael, and he gladly plays along, apparently appreciating every customer and channel partner and employee.

He talked about the modular data centres with virtually every watt coming in doing useful work and not being wasted on infrastructure maintenance. PUE (Power Usage Effectiveness) ratios of 1.04 and 1.03 were mentioned, with ambient air cooling sending chillers into the back of beyond.

These container-like data centre modules can hold 1,920 servers with 138TB of RAM and several petabytes of storage. Dell said: "We believe we are delivering over half of the world's modular data centres." Remember Sun's Blackbox? That was before it's time unfortunately and Dell modules are pouring into data centres through the doorway opened by Sun.

Next year these modules will be even more powerful. Michael said that the existing PowerEdge R910 has up to 2TB of main memory. The 12th generation PowerEdges next year will have more IO bandwidth and faster processors.

They will have flash storage "architected into the system from the beginning", directly in the server, Dell calling it tier zero. He talked of Dell's Fluid Data Architecture extending across EqualLogic and Compellent, with tiering extended from HDD and flash in the array into the server, via technology from the RNA Networks acquisition.

He talked of data centre racks, single racks with 1,024 cores linked by 10GbitE to a Force 10 switch, and the switches talking 40GbitE to a core switch. The rack would contain 40TB of DRAM and 40TB of flash and run "more workloads per server than ever before".