This sounds bonkers but there is a pukka press release issued by Singapore’s Agency for Science, Technology and Research (A*STAR) which describes Dr Joel Yang's work.

Bit-patterning is a way of packing more data into hard disk drives by making the magnetised areas, the bits, smaller and more regular. Current disk media relies on collections of magnetic grains, each grain being about 7-8nm in size, to form a bit.

Dr Yang works at the Institute of Materials Research and Engineering (IMRE), and he and collaborators say they can create media with bits formed from single grain structures about 10nm in size. The way this is done is to use a high-resolution e-beam lithography process to "draw" the nano-sized structures.

A developer solution is then used to create the structures in the media, and (here's where you need a pinch of salt) Yang adds sodium chloride, pure table salt in effect, to that and "was able to produce highly defined nano-structures down to 4.5 nm half pitch, without the need for expensive equipment upgrades".

This method shows, Yang says, that "bits can be patterned more densely together by reducing the number of processing steps". The HDD industry will be fascinated to understand how BPM drives can be made at a perhaps lower-than-anticipated cost. 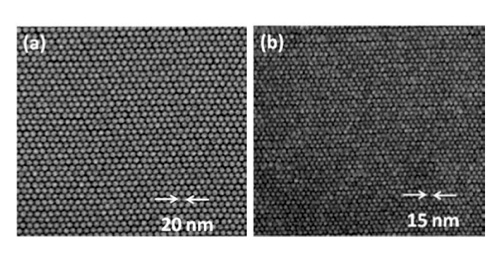 Scanning electron microscopy images of magnetic bits at densities of (a) 1.9 Terabit/in2 and (b) 3.3 Terabit/in2 formed after depositing Co/Pd multilayers onto resist structures. (IMRE)

Yang discovered this effect while at MIT. The researchers say current recording techniques for hard disk drives are running at around 0.5Tbit/in2. Yang's team has demonstrated working media with an areal density of 1.9Tbit/in2 and fabricated media with a 3.3Tbit/in2 density.

This is six times more than current media and would mean a 500GB 2.5-inch hard drive could hold 3TB with this treatment. The research team is working to see if that can be increased. ®