Professional and amateur astronomers will have their eyes on the skies this weekend, watching for the annual Orionids meteor show as our planet passes through the tail of Halley’s Comet.

The annual show lasts around a week and reaches its peak this weekend, when the Earth and Moon pass through the cone of debris left by Halley’s Comet as it takes its regular 76 year orbit around the solar system. Up to 50 meteors an hour could be visible, and will appear from close to the Orion constellation – which gives the shower its name. 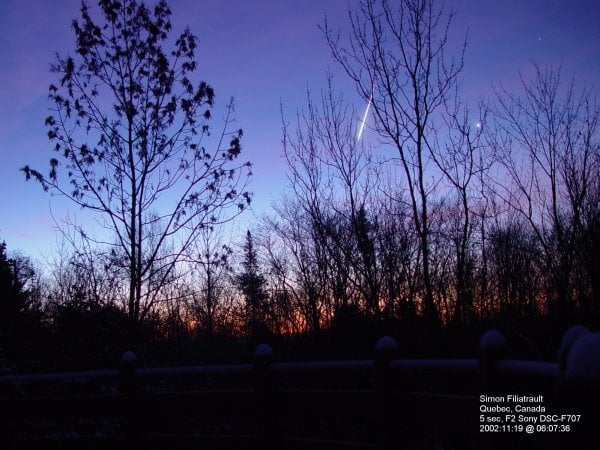 Eyes up tonight for the annual Orionid meteor shower

"Although this isn't the biggest meteor shower of the year, it's definitely worth waking up for," blogged Bill Cooke of the NASA Meteoroid Environment Office. "The setting is dynamite."

The cone of debris is so large that both the Earth and the Moon will pass through it, and Cooke and his team will be focusing on the lunar impacts particularly. With no lunar atmosphere to ablate the debris, impacts will show up directly on the Moon’s surface, and Cooke’s team have been studying these to try and understand the formation of cometary tails.

"Since we began our monitoring program in 2005, our group has detected more than 250 lunar meteors," says Cooke. "Some explode with energies exceeding hundreds of pounds of TNT."

Sky watchers should also be aware that a two and a half ton satellite is also due to splash down over the weekend. The German ROSAT is expected to hit the atmosphere at around 28,000 kph and experts have guestimated that there is a one in 2,000 chance of someone getting hit by the debris. ®