World Solar Challenge: Why the winners were so good

WSC Tokai University of Japan were crowned the 2011 World Solar Challenge champions on Thursday, after four-and-a-half days racing through the Australian continent. The Japanese team made huge gains on Day 3 over second and third-placed teams Nuon of the Netherlands and the University of Michigan.

How did they get so far ahead? Diederik Kinds, of the website solarwebsite.nl and a member of the Dutch Nuna 2 solarcar team, tells us how.

Some people thought Tokai, World Solar Challenge winners in 2009, had a terrific advantage over the competition that year because of their awesome GaAs (gallium arsenide) solar array. They thought the new regulations would level the competition and remove Tokai’s supremacy. They were wrong. 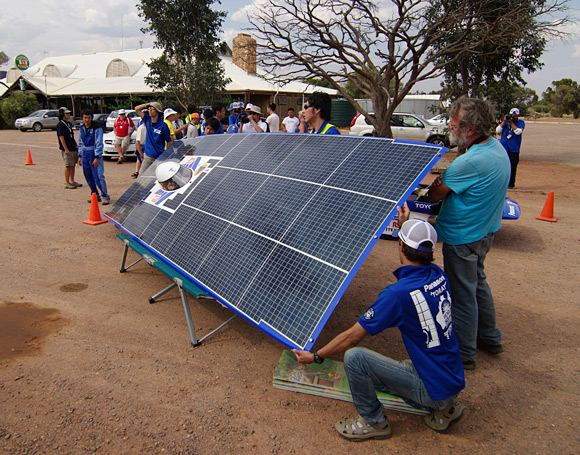 The Dutch team Nuon's solar car, Nuna 6, departed at 08:08am and arrived at 16:37am – an average speed of 89 kph. This 6kph difference with Tokai opened a gap on the day of about 30 minutes between the two cars.

What's that in vacuum cleaners?

Since this race is about energy, let’s do some energy calculations. I will take this site as example – you can calculate power consumption based on weight and aeroshape.

As a point of reference, Nuna used the equivalent energy of six hours vacuum cleaning to travel 600km at normal commuting speed.

Tokai’s 95 kph with the standard specs represents a consumption of about 1550W. And since they drove for seven hours, their consumption amounts to 1550 x 7 = 10.9 kWh.

In other words, to create a gap of 30 minutes to Nuna, Tokai had to consume 1 kWh of energy more than Nuna 6, or 10 per cent more energy.

Obviously, energy flows into the car via the solar panel, but where does it go to? First, there are losses from solar panel to electric motor, like in the motor controller and other electronic equipment required for operating the solar car.

Secondly, the aerodynamic shape requires energy – the shape of the car is important but surface smoothness is also a factor.

So, let’s see how good Tokai needs to be to be able to spend 10 per cent more energy create that 30-minute gap.

Keep in mind that one per cent of energy consumption is about 12W, similar to a small light bulb.

A five per cent improvement in aerodynamics results in two per cent less energy consumption. Five per cent is the difference between a clean car nose, and one that has flies on it, or other irregularities. So the car needs to be as smooth as possible at all times. Small things have great impact.

Let’s talk a bit about the battery. A typical solar car battery can hold 5kWh energy. Solar cars take into account what energy the sun delivers and what they can take out of the battery. Battery energy level is called State of Charge (SOC), and you may finish a race day with a certain percentage of SOC. Suppose you have two similar cars – if one drives faster on a race day, he will have covered more distance but will have less battery SOC.

Now suppose Tokai has taken more out of its battery SOC than Nuna, when rolling into Kulgera. Let’s say that number is 3.5 per cent of the total Energy Consumption, which comes down to 0.35 kWh. On a battery with 5 kWh capacity that’s seven per cent SOC less than Nuna - which is really not that much.

In short, to gain 30 minutes on Nuna, Tokai had to take seven per cent more out of their battery, have a car that weighs just 10kg less, with aerodynamics that is just five per cent better (this could already be achieved by keeping the car smooth and clean), a panel that can power two small light bulbs more and a little more efficient electronic system.
That totals the 10 per cent of energy that Tokai got to spend to increase their lead by 30 minutes.

Is Tokai the mystical energy powerhouse that people claim it to be?

Tokai’s technology is not light years ahead but just a few light bulbs better in every area. 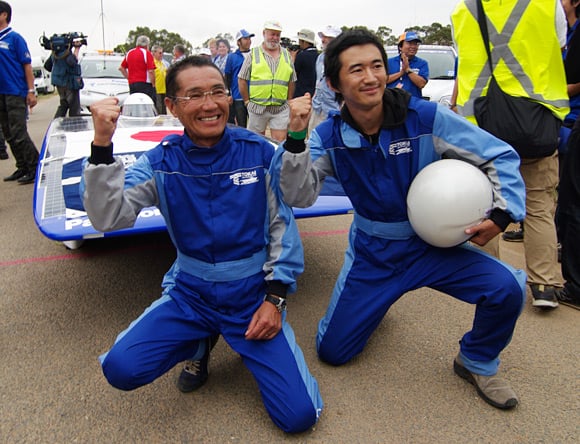 Tokai is not magic, not supernatural, not sent from the future and they don’t overpower their competitors with special technology.

They are just a very good team with great attention to detail. And that’s how you win races. ®

This article was originally published at solarwebsite.nl.

ROTM The man who gave us our first Robotic Overlords