Give the enterprise sysadmins what they want

Opscode, the commercial entity behind the open source Chef systems integration and management framework, is now doing Windows. And VMware supplied the Windex.

Chef is popular among the open source crowd and is the brainchild of Christopher Brown, the chief technology officer at Opscode. Brown knows a thing or two about automating cloudy infrastructure – and some of the shortcomings of current system management tools – because he was the architect and lead developer of Amazon's EC2 compute cloud.

Chef is supported on various Linuxes and is popularly used on Canonical's Ubuntu, Red Hat's Enterprise Linux, and clones of the latter, including CentOS. The tool is also supported for managing Solaris and OpenSolaris, and has some hooks to work with FreeBSD and AIX Unixes as well as SUSE Linux Enterprise Server. But with today's announcement, server instances running Windows Server 2003 R2, Windows Server 2008, and Windows Server 2008 R2 can be slapped around by Chef.

Jay Wampold, director of marketing at Opscode, said that early adopters of the Chef tool were perfectly happy using it on Linux and Unix servers. But over the past six to nine months, as the company has rolled out the Hosted Chef version of the tool, complete with enterprise-grade service level agreements and tiered pricing for support, it was time to get Windows support for Chef and the "cookbook" scripts that are the heart of the Chef system.

"There was a lot of demand for us to support Windows environments," Wampold tells El Reg, adding that server virtualization juggernaut VMware, which lives and dies on Windows in the data center, helped to put together and test the support.

How long before someone tries to buy Opscode now? A New York minute?

The Chef systems management tool can manage physical or virtual servers – it doesn't have any prejudices – and has the Chef Server at the heart of the system. This console is backed up by a CouchDB database and feeds data over a RabbitMQ messaging system into an Apache Solr search engine, which has faceted, natural language search that makes your system configurations and the recipes and cookbooks that you crate to manage and deploy systems searchable. 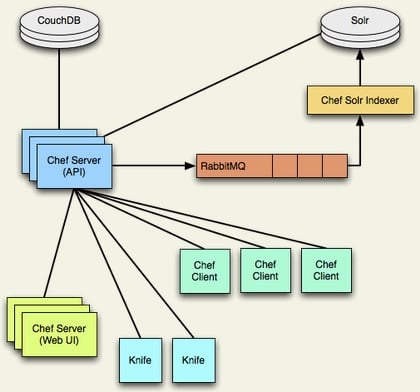 On the client side of Chef, you have the Chef Client, which is a web-based GUI that uses REST-based APIs to communicate with the Chef Server and to tell it what to do as well as to create cookbooks.

Knife is the command line interface that all system admins want to see in any tool, and Shef is the interactive Chef shell for creating a recipe (that's instructions for performing certain tasks on a server) and cookbooks (recipes that are strung together with their dependencies sorted out and managed by Chef so you can create and manage multitier applications on servers or clouds).

Chef is written in Ruby, and Brown is the first one to concede that Windows shops have not only invested a lot in PowerShell scripts for Windows servers, and they don't want to port their scripts to Ruby just to use Chef. And so with the 10.6 release of Chef, Opscode is supporting the execution of PowerShell scripts within recipes.

And Windows shops being spoiled by application installers, Opscode also realized that they don't want to have to cobble together and install bits of Chef here and there, so there is a single installer for the client side of the Chef tool, which runs on Windows Vista or Windows 7 – it can also be used to manage those operating systems, by the way – and which installs Ruby and all of its components in one fell swoop.

Out of the chute, Chef is able to install, configure, and update Windows Server, SQL Server, and IIS as well as deploying Web applications to IIS. Brown says that the community will add recipes and cookbooks for other Windows applications, but that Opscode is going to do the work on Active Directory, Exchange Server, and SharePoint Server.

You can buy a perpetual license to the Chef tool stack, rent a cloudy version, or just use the open source version. Private Chef runs inside your own data center and costs $106 per node under management, plus a 22 per cent annual service and support maintenance contract on top of that. Wampold says Opscode offers volume pricing, as most software vendors do.

Hosted Chef is the SaaS version of the tool, and it comes in four different versions. The basic license covers up to 20 nodes (physical or virtual doesn't matter, it is based on the number of unique VMs or physical devices that Chef Server has to uniquely track) and costs $100 per month. The standard Hosted Chef costs $300 and cover 50 nodes, while the enterprise Hosted Chef costs $700 and covers 100 nodes. The enterprise edition of Hosted Chef has a lot of options and costs more, depending on the options you choose. ®