Apple gets patent for ‘unlock gesture’

A US Patent granted today (October 25) will send Google and Android phone makers around the world reaching for their lawyers.

Read it again if you need to, but to The Register’s admittedly non-lawyer eyes, it looks like this. If you:

• Unlock a device using a gesture on a touch-sensitive display;

• Display an icon telling punters they have to unlock the device;

• Design the icon to tell users which direction they have to swipe the icon to unlock the device; or

• Provide visual cues for users too dumb to remember the unlock gesture;

…then you’d be breaching the patent.

While The Register can’t speak for every single Android phone or tablet in the world – not to mention other flavours of device – the one’s we can immediately call to mind use unlock gestures pretty much like the ones described in this patent.

Here, for readers’ enjoyment, is one of the illustrations accompanying the patent. 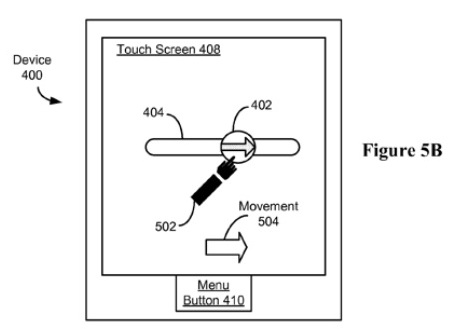