The UK government asked Google to take down 135 YouTube videos for reasons of national security in the first half of this year, states Google's biannual Transparency Report, released yesterday.

The report also shows that the German government asked for videos that included Nazi memorabilia to be removed, and that US police wanted videos taken down because they showed their officers in acts of brutality.

UK content removal requests went up 71 per cent compared to the previous six month period, when the government made no requests at all for content to be taken down on grounds of national security.

In January to June this year, UK police and government also requested that 61 YouTube videos be removed for reasons of Privacy and Security, three for violence and one for hate speech. The takedown of a further 20 was requested for reasons listed as "Other". Google fully or partially complied with 82 per cent of requests. 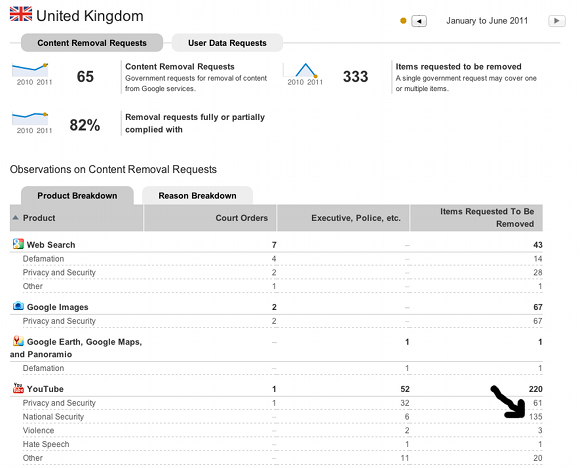 The Telegraph speculates that the bump in removal requests by the UK government since January this year came after MP Stephen Timms was stabbed by a student claiming to be a jihadist, and that the videos involved were jihad videos or those promoting Islamic terrorism.

It seems to be the Nazis that got the Germans sending in video removal requests. In total, the German police, government and courts asked for 583 YouTube videos to be removed – 322 of which contained hate speech. Google specified that this often meant Nazi content:

We receive lists of URLs from BPjM (BPjM-Modul), a federal government youth protection agency in Germany, for sites that contain content that violates German youth protection law, like content touting Nazi memorabilia, extreme violence or pornography, and we may remove those search results from google.de.

Google complied with 86 per cent of German content removal requests.

Among other things, US authorities got in touch with Google when they wanted to kill some YouTube videos showing police brutality. Google states:

In total the US courts, government and police asked for 113 videos to be taken down, one because it showed "government criticism".

Google complied with just 63 per cent of content removal requests from American authorities... ®