It was a bit perplexing when two weeks ago, apropos of nothing, commercial Linux distributor Red Hat affirmed its commitment to the Advanced Message Queuing Protocol (AMQP) messaging integration software that is at the heart of its Enterprise MRG-Messaging variant of the Linux stack it sells. Now we know why.

This morning, the Linux Foundation and a bunch of important financial services giants that make use of such messaging software have backed an alternative project, launched today, called OpenMAMA.

The MAMA in OpenMAMA is short for Middleware Agnostic Messaging API, and - like AMQP - OpenMAMA is seeking to be the open source interface between various queue-based messaging platforms, thus allowing interoperability between trading systems, market data systems, and other systems that are driven by messages more than transactions.

The OpenMAMA project is being spearheaded by NYSE-Euronext, which bought messaging platform developer Wombat Financial Software in January 2008. In particular, OpenMAMA is being steered by by Michael Schonberg, who is director of high-performance messaging and advanced trading solutions at the Pond-spanning brokerage house and who was a key developer on the original MAMA back in 2002.

(More precisely, Schonberg works for NYSE Technologies, the platform development wing of the brokerage that was run at arm's length in January 2009 to help speed up the sale of in-house technologies to hedge funds, brokerages and other exchanges.)

JP Morgan Chase, EMC, Finetix (a service provider that provides market data and hosting for financial firms that need to be close to the exchanges in New York and London), and Exegy (which provides hardware appliances to feed in market data at high speed) are all contributing to the OpenMAMA project and presumably benefitting from the closed-source MAMA messaging platform first created by Wombat nearly as decade ago.

It is interesting to note that Deutsche Börse, the flagship AMQP customer for Red Hat that operates the Frankfurt exchange, tried to buy NYSE-Euronext back in February of this year for $9.4bn. The European Commission's antitrust police have held up the acquisition based on the assertion that it would kill competition in derivatives in Europe. It is unclear what effect this deal might have on AMQP or OpenMAMA at this point.

Microsoft, VMware, Software AG, StormMQ, and INETCO have all stood up and put their support behind the AMQP protocol along with Red Hat. The popular RabbitMQ messaging framework now controlled by VMware, is in the AMQP camp. JP Morgan Chase actually created AMQP for its internal use and seems to be swearing allegiance to both AMQP and OpenMAMA now.

Bank of America, Barclays, Credit Suisse, and Goldman Sachs have also thrown their weight behind AMQP, as have Cisco Systems, Informatica, and Progress Software. Microsoft is a middleware player by virtue of its Message Queuing Middleware, which shares a common heritage with IBM's WebSphere MQ; it is perplexing that Microsoft is in the AMQP camp at all considering Redmond's general allergy to open source code, but financial services firms want one standard for messaging between platforms. Looks like they got two for the price of one.

IBM prefers its own WebSphere MQ middleware, and TIBCO Software sells a messaging platform called Rendezvous tuned specifically for financial firms and targeted by AMQP to date; both companies have not shown much enthusiasm for AMQP. And they will likely not do so for OpenMAMA, either.

OpenMAMA wants to be the open source, middleware-agnostic messaging API now. In a blog post, Schonberg said that OpenMAMA was the first open source project he had ever worked on and admitted that people might be skeptical of NYSE Technologies releasing the MAMA code it paid for three years ago to the open source community.

"We chose the Linux Foundation to host the project because we feel that they bring both the credibility in the open source community as well as a neutral home for the OpenMAMA project," explained Schonberg in the post. "Also, we selected the LGPL 2.1 license for OpenMAMA because it places the fewest restrictions on MAMA users while its hereditary nature ensures that project thrives and remains open."

Here's what the development roadmap looks like for the OpenMAMA project: 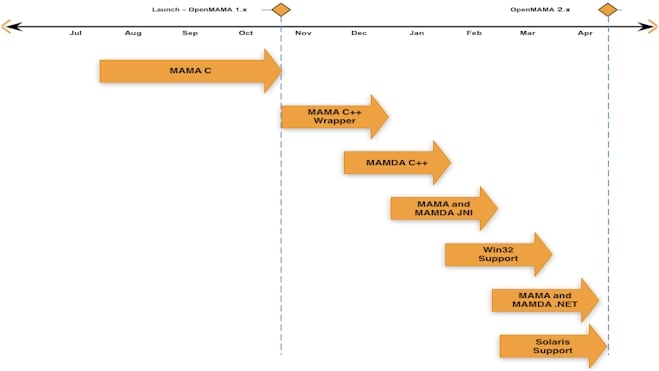 The initial code release, which you can download here, puts the MAMA C API out there for Linux platforms. Eventually, the code for C++, Java, and .NET bindings will also be made open source and support for Windows and Solaris operating systems is also on the schedule, too.

The Middleware Agnostic Market Data API (MAMDA) code, which layers on some features to chew on field-based data coming in from the messages to categorize and merge given sets of data for consolidation by financial applications, thus makes data easier to receive by the retinas of human beings. (If you consider traders to be human, of course.) The complete OpenMAMA and OpenMAMDA stack is expected to be cleaned up and open sourced by the first quarter of 2012.

Clarification: After this story posted, the Linux Foundation wanted to point out that AMQP and OpenMAMA can be complimentary. "If AMQP provides a MAMA bridge then existing and new MAMA applications will be able to use AMQP as a transport without any code changes," a spokesperson from the foundation that pays the salary for Linus Torvalds pointed out. Fair enough. ®