A riveting chapter in Boeing and Airbus' rivalry

Having made its first commercial flight on October 26, with a chartered promotional flight to Hong Kong, the new 787 Dreamliner enters regular airline service today. This is of course a great excuse for us to talk about the competition between the differing technologies and market visions favoured by rival aerospace colossi Airbus and Boeing. 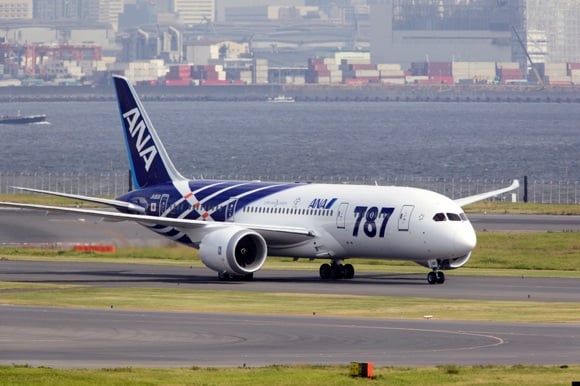 Don't need not steenkin' hubs. Or rivets either

That competition is based on two wildly different views of how to deal with two very different problems. The first is the way that people want to fly, the second is rivets.

Boeing is betting that the hub to hub style of intercontinental travel which it pioneered with the Jumbo, the 747, is now just so over. People would prefer to be able to travel point to point, even over very long distances. Osaka to Boston perhaps (one planned route) rather than Osaka, Tokyo, New York, Boston. So we've a small plane, carrying 210 to 290 passengers (for we don't think that there's actually a Jumbo-full who want to go Osaka-Boston) which can make those trans-oceanic trips. Excellent, why not give it a go?

Airbus has gone the other way. They think that the A380, a double deck Jumbo style machine carrying up to 850 passengers, will prove to be more popular. London-Sydney could fill up such a monster, London-LA or London-New York, and then the usual hub and spoke system could disperse the fliers to their actual destination cities.

Who's going to win here, in fact, whether anyone is going to win, is a bit of an unknown at present. Which is one of the joys of this market system really: we can plan all we like, consider what the future might hold, but the only way we truly find out is by going and doing. Point to point or hub to hub? What is it that people actually want to do? No planner could truly determine this and we'll know in perhaps 15 years what people have wanted to do. Even then we'll not be entirely sure because some will choose without actually caring either way, based on price or other factors.

But it's the other problem that most interests me, this problem over rivets. As background, around 10 per cent of the weight of an airframe (or certainly the fuselage) is the rivets we use to hold it together. If we could get rid of those then we could lighten the whole thing and thus use less fuel on every journey. Fuel is the major cost of every airline and thus airlines will just love and smother with kisses a manufacturer who can hold the plane together without rivets.

Boeing has gone for carbon fibre as their solution. It's expensive, yes, a bitch to work, yes, but it is light and if we make the planes from plastics then we don't have to use rivets. Wonderful and trebles all round for the design team.