The Gorilla Glass screen aside, physically, the S feels just a little cheap given its all-plastic body but the use of lightweight materials has kept the weight down to an impressive 598g, 3g less than the iPad 2. The only part of the body that may suffer from abuse is the tethered plastic door that covers the micro USB port and SD card slot. 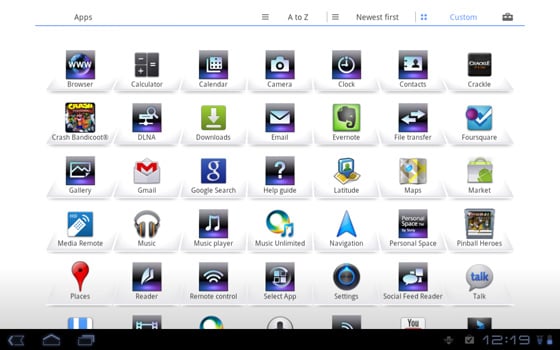 App menu with Xperia skin
Click for a larger image

Indeed, the storage expansion port takes the full-size SD cards rather micro versions, which is a good thing but there’s no HDMI port which is a very bad thing. Sony does give you integrated DLNA but that’s available through Market apps like Skifta anyway and no matter how good the implementation it’s no replacement for being able to mirror the display onto your telly over a cable. That said, if your telly supports it, the Tablet S has DLNA functionality to allow you to 'throw' your content onto a bigger screen.

A full-sized USB 2.0 port would have been a nice touch too and while not universal on the competition – both the Acer Iconia A500 and Toshiba AT100 have one but neither the Motorola Xoom and Samsung Galaxy Tab 10.1 do – they are very handy, so I count this as a mark against. The power supply isn’t the most stylish of things either. The actual unit is a small brick-and-tail affair just like a cheap netbook’s while the connector looks like an enlarged version of the old Sony Ericsson FastPort. 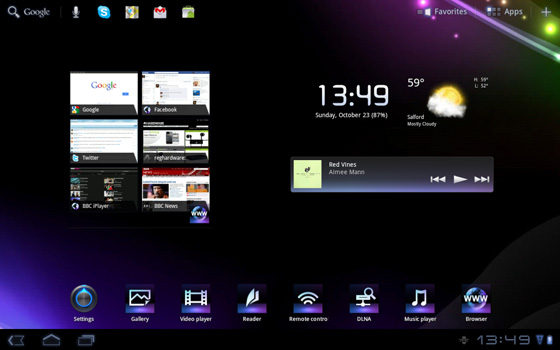 Home screen: there are app shortcuts in the top left corner
Click for a larger image

Like most Honeycomb tablets, you can’t charge the S through it’s micro USB 2.0 port. And if you want to transfer files you'll need the SGP-UC1 adapter cable. Sony has given Honeycomb a light re-skinning to make everything resemble Sony Ericsson’s Xperia devices and you’ll hear no complaints about that from me, because I rather like the Xperia theme. The home screen also features a rather subtle twist by letting you add four app icons to the bar at the top of the screen which houses the Google search icons. 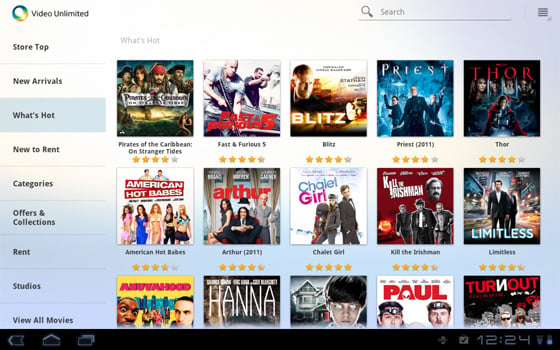 As for the on-board software, the interesting additions are the Music and Video Unlimited services that use Sony’s Qriocity back-end and which come with six months free membership. There’s also full Playstation certification but the PS Store is very poorly stocked at the moment. With a nod towards its home entertainment hardware portfolio, Sony has installed an infra-red remote control transmitter in the S so you can use the it to operate your telly, hi-fi or Blu-ray player. 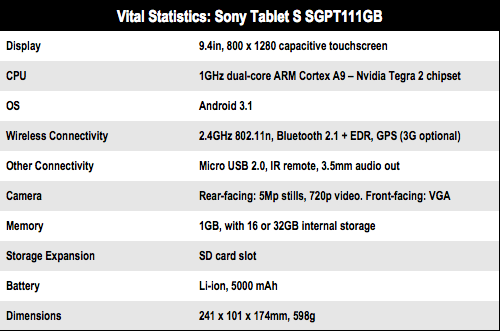