Is your old hardware made of gold, or just DIRT?

Why it's not worth much, unless it's really old

So you want the money to pay for the office Christmas party, naturally. We're all told endlessly that all those piles of old electronics and high tech'n'stuff are denuding the planet of valuable metals, so you should be bundling up your kit and sending it off to people like me who will melt it down for the dosh, yes? I'll send back a brown envelope or two of cash and it's trebles all round!

Well, yes and no: this does work for old kit and almost certainly doesn't for new. By old here I mean the sort of stuff you threw away decades ago.

A couple of technical points about metals and recycling. The first is that, as I've said here before, ordinary stuff with metals in is generally known as “dirt”. When the value of the metals is greater than the cost of extracting the metals then dirt becomes “ore”. This is an economic concept, not a geological one and as with such economic concepts it applies much more widely than just to piles of rocks lying around under some foreign field. It applies to all that expensive iron that you lot have littering your offices as well. It may be made of various metals, you may have paid a lot of money for it, but when you no longer need it to push electrons around it might be either dirt or ore.

The second point is that the economics of recycling (the recycling of anything at all) work the other way around than the usual increasing unit value from wholesale to retail that we're used to. We usually think in terms of each PC in a container of PCs having a lower value than one single PC on a retailer's shelf just where you want it. Recycling runs the other way: unit values increase as you have more units. 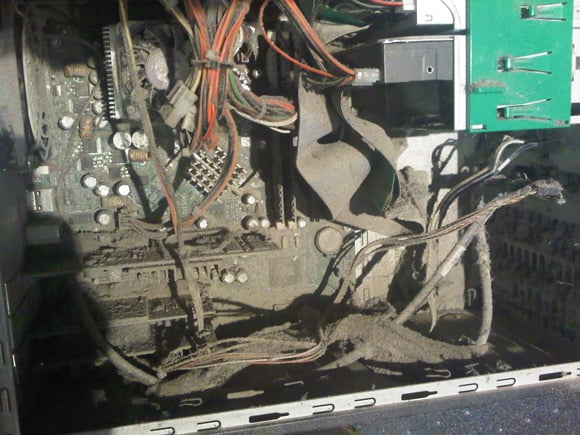 Is this dirty dirt, or dirty ore?

As an example, think of the catalytic converter in your car. There's maybe a gramme of platinum in it (usually, something like a gramme per half kilo brick of zirconia, a Fiat 500 having one brick, a big Jaguar maybe 8) and platinum is currently $1,500 a troy ounce or so. Call that $50 for the Pt in your car then (or $400 in that of the fat cat boss - and no, troy and avoirdupois ounces, just not important here).

So, can you clip the converter off the car of the bird next door and get $50 for it? No, you most certainly cannot. You'd be lucky to get $10 for one. But if you had 100 of them, you might well get $15 each and if 2,000 then you can actually take them to the refinery (Johnson Matthey, Cheshire, for those who desire to know) where you'll get the Pt value, minus processing costs, plus they'll also pay out on the palladium and rhodium contents. Scrap values increase as you have more units.

So here we have our two basic rules which will help to determine whether flogging your old kit is a worthwhile dream. The more pieces you have the more scrappies like me are willing to pay for each piece: assuming that what you have is actually ore, and not just dirt. What determines the ore/dirt interface is of course which metals it has been made out of in what quantities.

As a general rule, newer equipment is less valuable than old, for these purposes at least. It really wasn't all that long ago, within my working lifetime, that the gold on connectors was a 200 nm plating. It doesn't sound like all that much but these things add up and old, say pre-1990 or so motherboards probably are worth melting down just for the gold. That you can reclaim tin, lead and copper at the same time can make it a very profitable occupation in fact. One cute trick was to melt the solder off (250°C to 300°C or so) and at this temperature the solder and the gold form a eutetic alloy. This you refine electrolytically, the gold is in the sludge on the bottom of the tank and the solder can be sold for a 10% premium to new material as it has been electrolytically processed.

Another example is that the gold in an 80286 was worth about $5 (more like $15 now at current elevated prices).

In fact, with old PCs, these pre-1990s say, get enough of them into a pile and they were ore, not dirt. However, if there's metal value when they're scrap, that means, obviously, that someone has had to buy the metal to make them and people don't like doing that. So the pressure has been to reduce the metals values that go in to the machines in the first place. That gold plating is more likely to be 2 nm now that 200 nm. The copper tracing is much thinner than it used to be, solder is placed much more accurately and with less of it. The modern PC is, if you look purely at metals values, much more like dirt than was its decades-ago predecessor.

There's only one way in which they have become more expensive and that's the banning of lead in solders. We have to use tin solders, not tin/lead now and as tin is worth much more than lead there's that one component that is pushing the value calculation the other way. That tin solder also grows whiskers (really, you can get a pointy “whisker” growing out of a majority tin solder which then shorts the circuits) is one of the explanations why modern electronics now fail before becoming useless rather than becoming useless (for reasons of software bloat) before they fail, as they used to.

Next page: Must get away from Chinese rare earths! Who here's willing to pull old hard drives apart for 25 cents a go? Well, the Chinese might ...
Page: