One gram of fiber cleans a ton of water

Scientists from Queensland University of Technology (QUT) have developed a new material for cleaning up contaminated water from radioactive leaks and medical processes.

The team mixed titanate nanofiber and nanotubes into a powder that, it says, will clean the radioactive particles in a ton of water with a single gram, provided it’s properly distributed or filtered. The outsides of the nanotubes are coated with silver oxide nanocrystals to hold and fix radioactive iodine ions, even if the material becomes wet again.

"One gram of the nanofibers can effectively purify at least one ton of polluted water," Professor Zhu said in a statement. "This saves large amounts of dangerous water needing to be stored somewhere and also prevents the risk of contaminated products leaking into the soil." 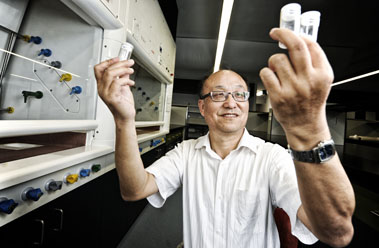 The materials were co-developed with the Australian Nuclear Science and Technology Organisation (ANSTO) and Pennsylvania State University in the US. Zhu said the development would give Australia a leading role in cleaning up both existing nuclear sites, and future ones.

"Australia is one of the largest producers of titania that are the raw materials used for fabricating the absorbents of titanate nanofibres and nanotubes,” he said. “Now with the knowledge to produce the adsorbents, we have the technology to do the cleaning up for the world."

The materials developed by the team would be of limited use in cases like the ongoing nuclear accident in Fukushima, which is now thought to have released up to double the originally reported amount of radioactivity. Given the nature of the accident, dispersal would be a problem, but it would offer a good way to clean and process waste from controlled nuclear processes. ®