The trials and tribulations of data centre networking

Reg Research For much of the last decade data centre networking, along with networking in general, has become accepted as part of the glue that is invisible to business users.

End users now take for granted that networking ‘works’, but with new services placing greater stress on data centre networks, what do organisations think about the state of their networks and how do they see them developing in the near future? A web survey run on The Register during August of 2011 allowed 237 respondents to give us their feedback on data centre networking, and we wish to thank them for their inputs and insight.

Given that everyone today, unlike 20 years ago, accepts network reliability to be a given, it is no surprise to see that at a high level the vast majority of survey respondents report that their networks are reliable and able to meet their current requirements. Only a very small number indicate major concerns in these areas (Figure 1). 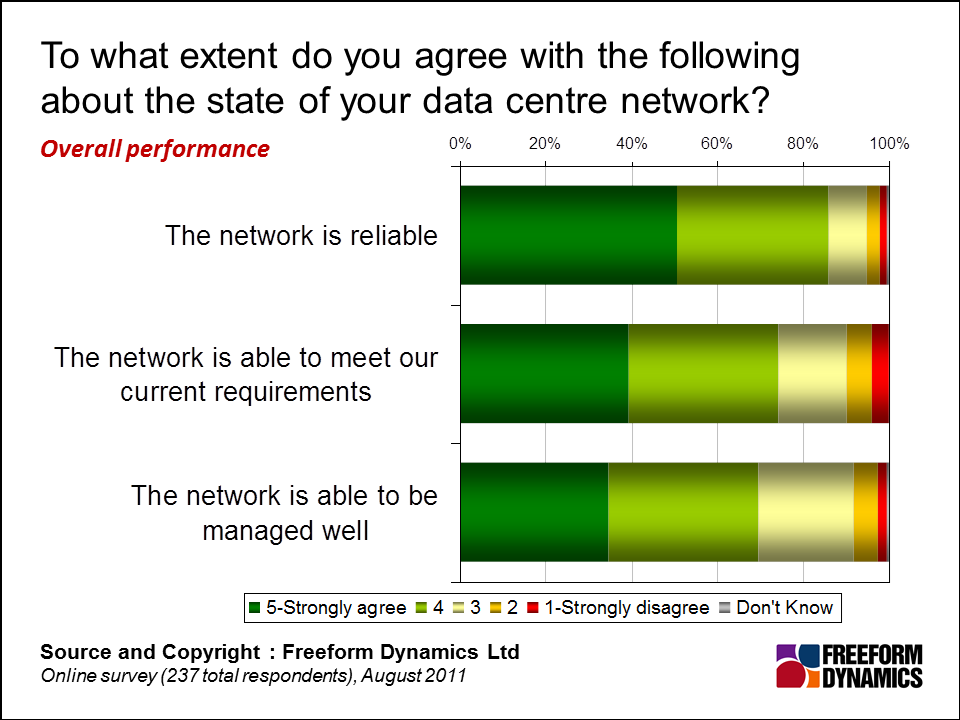 But if we dig down below the surface, it is clear that some organisations are beginning to notice signs of stress and the potential for bottlenecks is already being recognised (Figure 2). 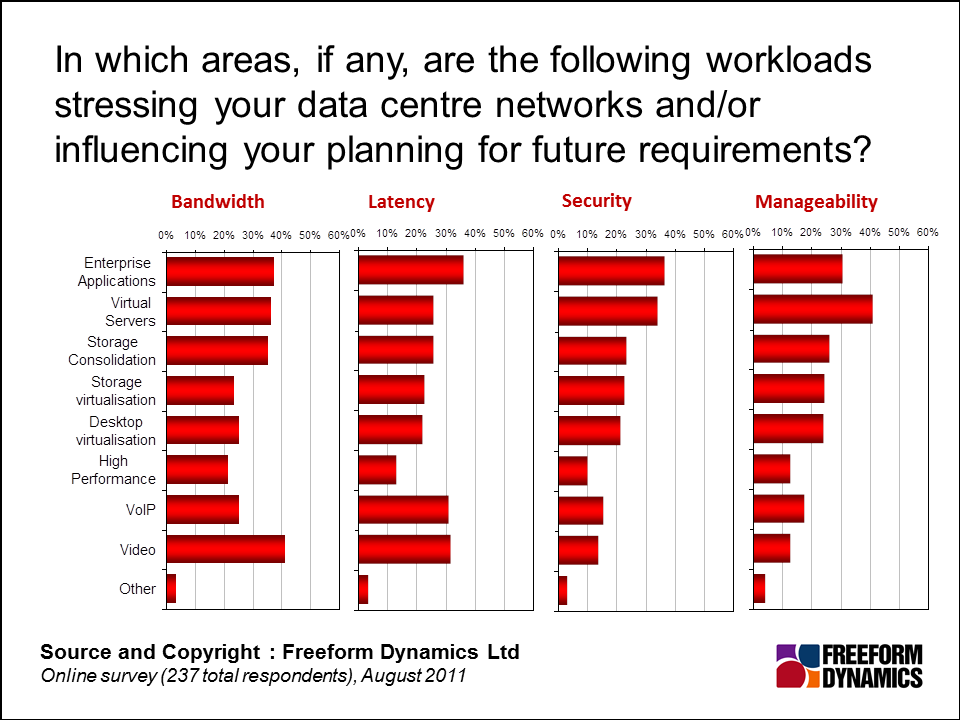 Some of sources of stress we see here, such as enterprise applications, have been challenging networks for years, if not decades. Others, most notably virtual servers and video, are new services that have only begun to have a major impact over the last year or two. Voice over IP (VoIP) is somewhere in the middle. While it has been around for quite some time, it is now becoming a major source of stress, especially in larger organisations as they begin to adopt it on a wider scale.

It is worthwhile recognising that in addition to the results from the mini-poll, the challenges posed by server and storage virtualisation, especially in terms of network management match well with anecdotal evidence and previous research accrued. In particular, early adopters of server virtualisation report the management of their networks quickly becomes an area requiring considerable attention.

So with some sources of stress being very visible, what is actually limiting the ability to better manage data centre networks? Recognised limitations fall into two broad areas. Firstly, there is the physical side of things to do with monitoring and management tools and with the nature of the installed infrastructure. Secondly, we have the ever familiar people and process related challenges (Figure 3). 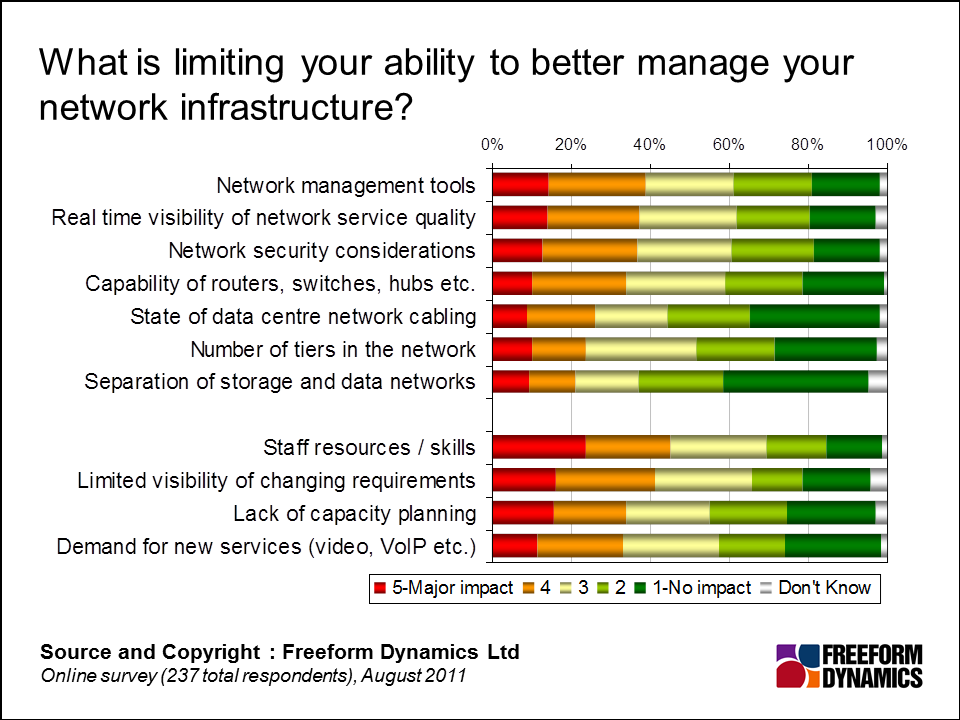 It is interesting to note that in both of these areas there is something of a bifurcation in responses with those acknowledging these factors to have high impacts almost evenly balanced by those stating they are not having any appreciable influence. This tells us that all of the problems can be addressed, but that many are still struggling with some of them or they have yet to be recognised by others.

Considering people and process related issues, beyond the IT standard response expressing concerns at the availability of staff and a desire to improve the state of their skill sets, it is clear that the planning side of things has the potential to become a cause of concern, especially as demands for new services to be accommodated escalate (Figure 4). 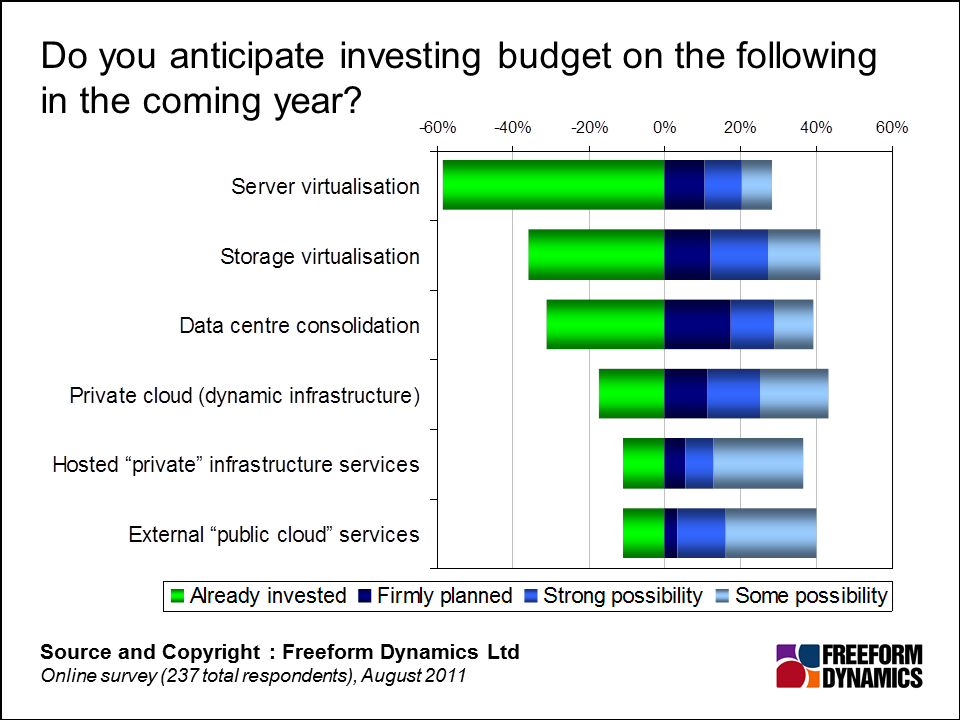 Let’s start by looking at where organisations have already invested in new services, which shows just how pervasively “virtualisation” has moved into the mainstream. The key question here, as we intimated previously, is whether the network has kept pace with this activity – something to bear in mind for those still executing or planning to invest in server or storage virtualisation initiatives. The growth in virtualisation, and more especially private cloud initiatives may in the near future, place considerable strains on data centre network management, and the same is true for hosted service adoption.This is all in addition to the network implications of ongoing data centre consolidation activity.

Against this background, we see a number of ways organisations are looking to take their network infrastructure forward (Figure 5). 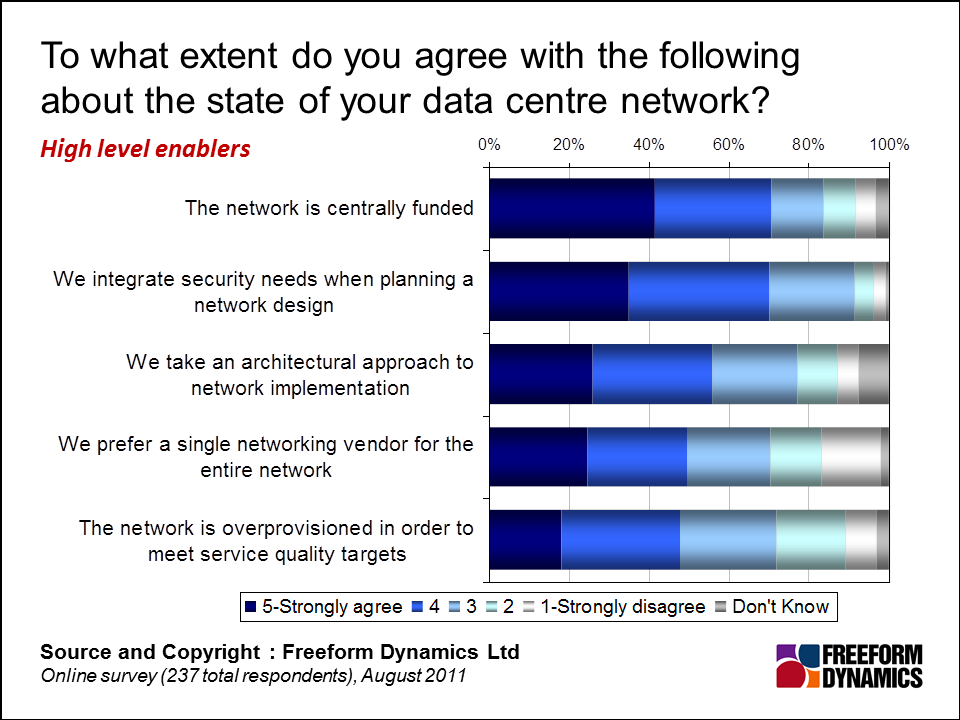 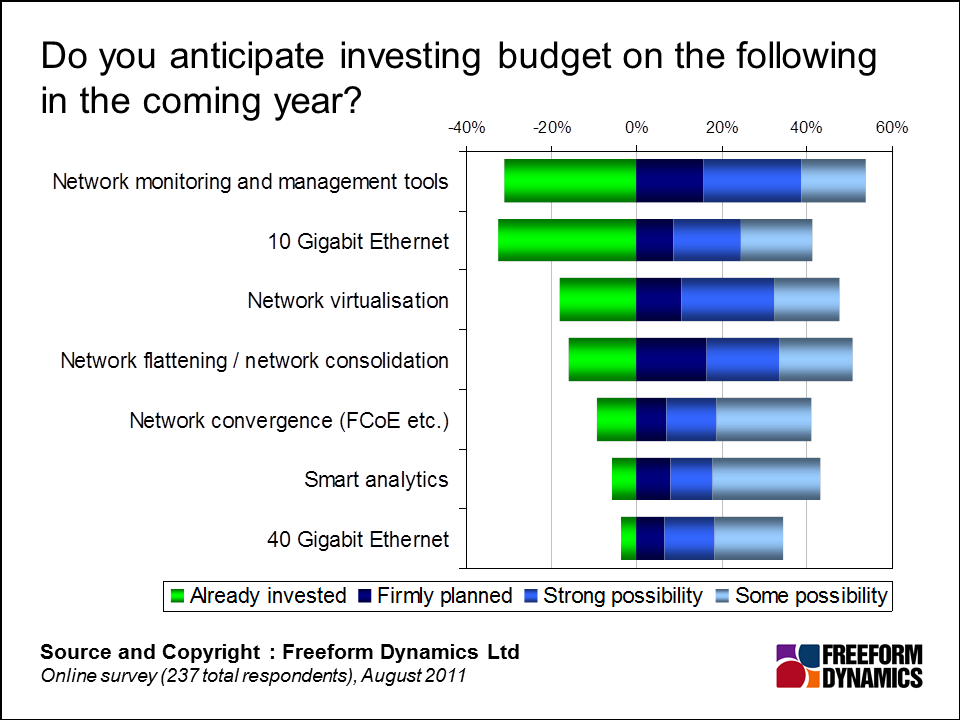 Looking at this picture, the adoption of new network offerings, most notably 10 Gigabit Ethernet, has been taken on board by a good number of organisations, but other more radical or emerging approaches, such as 40 GbE, network flattening and the consolidation of storage and Ethernet networks, have been adopted by only limited numbers at this point.

The slow adoption of more advanced solutions despite the fact that several vendors are actively promoting them is indicative of a combination of the ‘rose coloured glasses’ view of the network we saw in our first chart, coupled with difficulties securing investment that came through in some of the anecdotal feedback. This highlights the downside of the network being viewed as a corporate asset, i.e. that investment is sometimes hard to allocate to cost-centres and application or service oriented budget structures.

That said, it should also be recognised that while considerable numbers of respondents report that new solutions are not in their plans for the immediate future, the fact that some adoption has taken place does indicate the emerging technologies listed are now considered mature enough for mainstream usage.

A major surprise that springs out of these spending plans concerns the relatively high numbers with at least a strong possibility of buying monitoring and management tools in the next budget cycle, as well as the high numbers who have recently invested in these areas. This is unusual as we know from surveys over the years that it can be very difficult to get approval to acquire monitoring and management solutions.

Further analysis reveals that organisations adopting a strong architectural approach to data centre network implementation, together with a clear emphasis on network management tools, report significantly greater comfort with respect to network reliability and the ability to meet current requirements.

This further underlines the overriding lesson from this research that there are no magic bullets when it comes to dealing with the challenges in this area. A rounded approach across architecture, tools, policy and process is required. ®