The hypervisors, they are a-changing

Server virtualization is perhaps not as pervasive as many believe, and customers are not as locked into any particular hypervisor as many companies peddling this magic software layer might hope.

This info comes from the latest V-Index survey from Veeam Software, a maker of add-on management tools for VMware's ESXi hypervisor, which is conducted on a quarterly basis in the US, UK, France, and Germany.

The survey only talks to fairly large companies – those with 1,000 or more employees. About a third of the companies surveyed had more than 3,000 employees. Veeam survey not merely its own customer base, but rather server shops at large, which also have other hypervisors.

In the September V-Index, 86.5 per cent of the 578 organizations that participated in the poll had some sort of server virtualization in their data centers. And across all enterprises, including those who did not have server virtualization at all, an average of 38.9 per cent of servers were virtualized, and they had an average of 701 servers in their data centers.

From the looks of the data, only x86 servers and hypervisors were part of the survey. This is a serious shortcoming, considering how much Unix and proprietary gear is still out there among large enterprises.

It could just be that some IT managers garbled their responses and have screwed up the data, but perhaps Veeam is on to something. 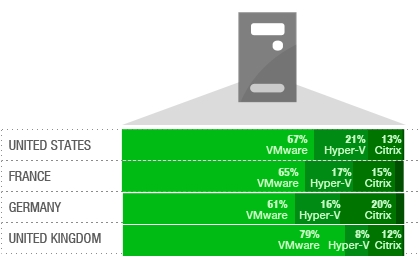 The penetration of various hypervisors on x86-based servers depends on whether virtualization is being used to run virtual desktop infrastructure (VDI) or more traditional server workloads.

On traditional server stuff, VMware still rules, with 67.6 per cent of those companies that have hypervisors saying that one or another flavor of ESX Server or ESXi is their primary hypervisor, with only 14.4 per cent going for XenServer from Citrix Systems, and 16.4 per cent opting for Hyper-V from Microsoft. Red Hat's KVM is tossed into the Others category, which accounted for a meager 1.6 per cent.

When you shift to talk about hypervisors running on servers to specifically stream VDI desktops, then XenServer is cited by 24.9 per cent of shops as their primary hypervisor, Hyper-V by 20.3 per cent, and ESX by 54.2 per cent.

Now here's the interesting bit: 38 per cent of companies using virtualization for traditional workloads say they are planning to change their hypervisor during the next year.

The cost of the current hypervisor platform was cited as the main reason for the jump by 58.9 per cent of the jumpers, with nearly half saying that they didn't like their current vendor's licensing model, and they did like the features offered with alternative suppliers or that the alternatives had matured enough that they could contemplate making a shift. While VMware was not mentioned specifically by name as the one that companies were thinking about ditching, KVM, Hyper-V, and XenServer have been in catch-up mode for a while, and have largely caught up.

But of course, VMware is focused on cloud fabrics and infrastructure and platform clouds, areas in which Citrix, Microsoft, and Red Hat are playing catch-up. ®