People who fire off abuse online tend to be keyboard warriors who lack self-control and are fuelled by vengefulness while protected by cloaks of anonymity. And they're going to cost businesses a ton of cash as they struggle to defend their reputations.

This is according to a frankly shocking study published in the current issue of the Computers in Human Behavior journal.

Online smearers also tested strongly positive for impulsiveness, academics at the Florida Institute of Technology concluded in their study. Their paper, Rash impulsivity, vengefulness, virtual-self and amplification of ethical relativism on cyber-smearing against corporations, focused on flames and smears against corporations, rather than trolling individuals.

Researcher Michael Workman gave personality tests to 193 largely college-educated "social media literate professionals" from across the US and Europe, and then asked them for their online aliases, tracking them through chatrooms and forum boards and noting down any trolling or similar activities (on condition of keeping their information private).

The main outcome was that of the four traits they tested for, the strongest correlation with cyber-smearing was a belief that ethics are relative and that there is no objective right and wrong: 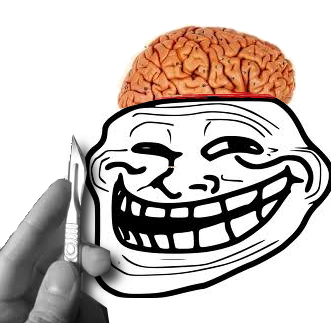 El Reg's trolls are an exception: they're not vengeful,
they're just generating page hits debate.

Workman also noted that "when people who lack self-control and have tendencies to seek revenge especially when shrouded in anonymity" they tend to reach for the caps lock key and engage defamation mode.

Also bears defecate in the woods, but there are serious bucks to be made in this business: Workman highlighted the lucrative industry that has grown up around corporate reputation management.

The success of these interventions has depended on the motives of the perpetrator, thus knowing the underlying factors for cyber-smearing is extremely important to knowing which action to take. Ultimately, organizations in the future will increasingly have face misinformation disseminated by people who are rash or vindictive, and the public will have to become better at discerning these opinions and rhetoric from facts and descriptions.

Rash impulsivity, vengefulness, virtual-self and amplification of ethical relativism on cyber-smearing against corporations is available from ScienceDirect. ®