US IT sector gains jobs

The job situation in the United States has improved in the past three months, but the growth in the workforce is still not sufficient to keep up with population growth, much less make much of a dent in the unemployment rate, which remains stubbornly at high levels. 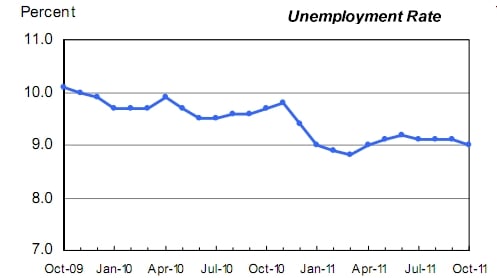 The official US unemployment rate

Private sector employers surveyed by the BLS, which is a unit of the Department of Labor, said in the latest jobs report (PDF) that they had created 104,000 net new jobs, which is good news until you realize that this is about half of the rate that is needed just to keep up with population growth.

The US economy needs to add many hundreds of thousands of jobs per month to get the unemployment rate back down to 4.5 per cent or so, what many economists have thought of as the rate of structural unemployment in the country. I think economists had better look out their windows a little more and start getting used to the idea that maybe 6, 7, or heaven forbid 8 per cent is the new structural unemployment rate below which the US economy will not fall. If this turns out to be true, it will create a feedback loop that will keep the housing market frozen, and the inability of people to sell their homes will mean they can't change locations to change jobs. If you rent, you can be a whole lot more mobile.

While non-farm private companies added 104,000 jobs, because of budget shortfalls local, state, and Federal government agencies slashed 24,000 jobs – so the net gain was only 80,000 across the 50 states of the union. The good news is that the BLS went back and revised its estimates for net job creation in August and September, and now believes 104,000 jobs were created in August (up from an estimate of 57,000) and 158,000 were created in September (up from the 103,000 reported a month ago). If you trend it out, the U. economy has therefore averaged 125,000 new jobs per month over the past year. At that rate, it would take nine years and four months to bring the unemployment rate to zero; halve that time, and you are back to what we used to think of as structural unemployment. 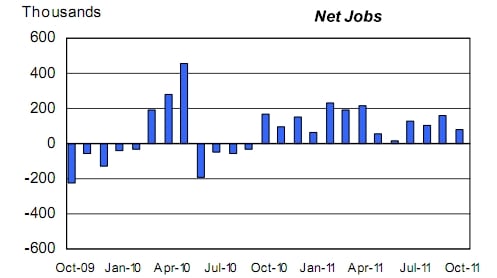 Job creation and destruction in the US

The manufacturing sector added 5,000 jobs in October, and mining companies added 6,000, with the hunt for natural gas and oil accounting for about half of the increase in workers. Healthcare companies added 12,000 workers, and the hospitality and leisure sector added 22,000 people. The professional and business services sector, which has a fairly large IT contingent, added 32,000 workers last month.

The BLS doesn't track jobs by type, but rather by employer, which strikes me as stupid in a Big Data world. What the US government needs to do is append a job code to every employee and then count the actual types of jobs being created and destroyed out there in the economy as well as looking at things by industry. Sometimes an industry is hurt by an economic downturn and sometimes jobs leave the US economy and they just never come back. It would be useful, as we are planning our careers, to see the trendlines for jobs. Maybe programmers do better in a recession than auto workers. It is hard to say, because we don't collect the data.

We can nonetheless get a kind of indicator of how IT jobs are doing by drilling down into the establishment data gathered up by the BLS each month.

Among manufacturers, those that craft computer and electronic components cut 1,900 jobs to a total of 1.13 million employees. Computer and peripheral makers were down a mere 100 workers to 172,800, and semiconductor and electronic component makers cut 200 people to 389,200. Data processing and hosting companies added 1,600 workers, for a pool of 238,600. Companies engaged in computer system design and related services added 13,000 workers to hit 1.52 million workers. Management and technical consulting companies added 17,500 workers, a cup of water in the bathtub full of 1.07 million workers. ®