Aircraft-carrier size ball to pass inside Moon on Tuesday

A gigantic, spinning, dead black spherical object dubbed YU55 and approximately of the same bulk as a nuclear aircraft carrier is expected to make a close pass by planet Earth on Tuesday night, coming well inside the orbit of the Moon. 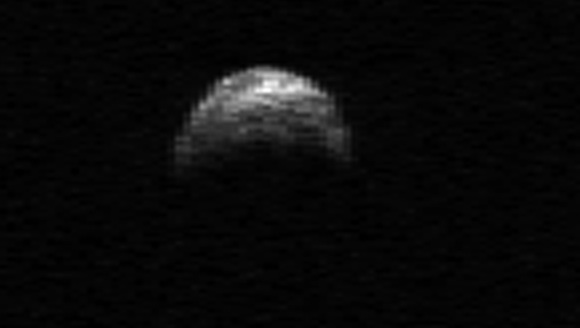 Looks a bit like that thing from The Fifth Element

NASA boffins have been tracking YU55 for some time using telescopes and the mighty Arecibo and Goldstone space radars, and they offer the following description of it:

Arecibo radar observations ... show it to be approximately spherical in shape. It is slowly spinning, with a rotation period of about 18 hours. The asteroid's surface is darker than charcoal at optical wavelengths.

YU55, due to the fact it will pass close by, is classified by NASA as a Near Earth Object, or NEO. The space agency's current assessment of its orbit is that it is such as to regularly bring YU55 close to Earth: however it is won't crash into the mother planet this century at least. More detailed observations set to made during the upcoming close pass will allow a much more detailed forecast to be made.

Or as NASA puts it:

Although classified as a potentially hazardous object, 2005 YU55 poses no threat of an Earth collision over at least the next 100 years. However, this will be the closest approach to date by an object this large that we know about in advance and an event of this type will not happen again until 2028 when asteroid (153814) 2001 WN5 will pass to within 0.6 lunar distances.

The titanic cosmic eight-ball is our first visitor in its weight class since 1978, apparently. According to NASA: "Scientists are treating the flyby of YU55 as a science target of opportunity – allowing instruments on 'spacecraft Earth' to scan it during the close pass." ®

... but humans still needed to fix the 'Hygiene Compartment'