Every soldier could get heavy-weapons firepower in future

The US Army has announced successful tests of a new, lightweight portable machine-gun which fires special plastic ammunition. The gun and ammo are so much lighter than current weapons and their brass-cased cartridges that some soldiers are suggesting that every infantryman could in future pack the sort of firepower reserved today for heavy-weapons specialists. 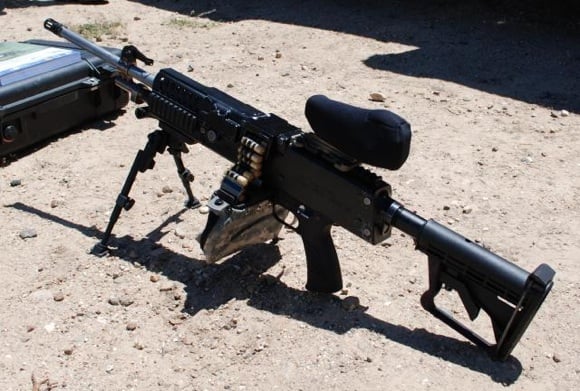 The machine-gun that only weighs as much as a rifle.

"I could see a whole squad carrying it," said Specialist Brandon Smith of the US Army, having participated in the trials over the past two weeks. "You would own the battlefield."

Normally only two soldiers in each eight-man squad* carry a light machine gun (LMG, aka Squad Automatic Weapon or SAW). This shoots the same ammunition as the other troops' rifles, but it is normally fed from a long belt rather than a magazine with only 30 rounds, and the LMG is designed to be fired on full auto for sustained periods (though in short bursts only, or even its heavy barrel would soon fail due to overheating). The gunner carries a lot more ammo than his teammates, and they sometimes carry some extra for him too - the idea being that his heavy firepower will pin the enemy down in a fight, letting the others manoeuvre and win the battle.

The downside of this is that the machine-gun and its belt (nowadays generally packaged in a box fitted to the gun, to prevent it flapping about and being a pain) are heavy, so much so that the gunner is at a decided disadvantage in a close-up gunfight where he needs to aim and shoot quickly while standing up. And the total load of weapon plus lots of ammo is very heavy.

Thus most soldiers are armed with assault rifles not intended to deliver sustained automatic fire and holding less ammo. These lighter weapons are handier for close-in fighting and permit other kit to be carried.

But US military boffins at the famous Picatinny Arsenal have been working on this situation for some time. Since ammo weight and bulk is much of the problem, they have come up with a new kind of ammunition: Cased Telescoped cartridges.

In a cased telescoped round, the bullet is no longer attached to the tip of a brass case full of propellant powder. The new case is shorter, fatter and made of plastic, so weighing substantially less, and the bullet is sunk into the middle of the propellant which makes the whole round shorter - it has been "telescoped". A shorter round weighs less itself, and also means that the gun's action, feed equipment etc is smaller and thus lighter as well. It's a trick originally developed for tanks, to make the turret smaller and easier to protect.

According to the Picatinny scientists, their new LMG and a thousand rounds of its plastic-cased-telescoped ammo weigh no less than 20.4 pounds less than the current M249 (a version of which is also used by British troops) and a thousand ordinary 5.56mm brass cartridges. The new LMG shaves no less than 8.3 pounds off the 15.7-lb M249, coming in at just 7.4lb - actually lighter than a standard British SA80 assault rifle! This, perhaps, explains Specialist Smith's opinion that it would be reasonable for all soldiers to carry such weapons, rather than just heavy-weapons specialists.

Next page: So why aren't people buying it like hot cakes?
Page:

What would possess a nonprofit to go after Mark Zuckerberg's empire?
Legal8 Feb 2023 | 1

Torrenting is still a thing, it still works, and if streaming vendors get mean, it's still an option
Applications8 Feb 2023 | 6

Facebook parent could then offer that data to other advertising clients, complaint alleges
Applications8 Feb 2023 | 5

Opinion As Google and Microsoft make us all AI consumers, remember that to err is human, but to really mess things up at scale takes a computer
AI + ML8 Feb 2023 | 10