Every soldier could get heavy-weapons firepower in future

So why aren't people buying it like hot cakes?

There are other advantages: the new LMG's novel rotating chamber (shown in action in the vid below) doesn't heat up as an M249's does, and plastic cases are more heatproof than brass ones, thus reducing or eliminating the issue of "cook off". This is where a round is chambered and then goes off immediately due to the chamber being hot from prolonged firing, regardless of whether the trigger is depressed at the time. 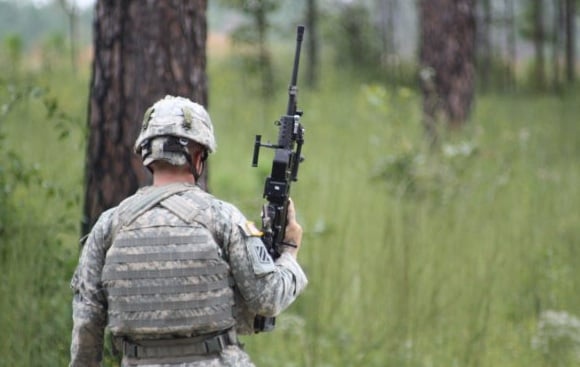 Certainly this bloke isn't finding it too heavy.

All in all, the new LMG and its plastic-cased ammo would seem like a no-brainer: but there is as yet no certainty that it will see service. Changing from NATO standard 5.56mm brass cartridges would be a move with international implications, and would involve massive expense and logistic trouble. There would probably need to be, if not a rifle to shoot the new ammo - the new LMG is more or less a rifle, just a much more powerful one** - then a shorter carbine type weapon. The Picatinny engineers are working on one, but it isn't ready for sustained trials yet.

Then, having made the massive effort to switch to cased-telescoped, the Western-aligned militaries of the world might find they needed to do the same thing all over again. This is because the Picatinny boffins are also working on caseless ammo, in which the entire cartridge apart from the bullet burns up on firing. This would potentially make the ammo lighter still, and further lighten weapons by removing the need to eject spent cases. Caseless ammo has been successfully developed before, however - for the German G11 rifle of the 1980s - and failed to gain adoption despite its undoubted virtues.

Perhaps fully caseless ammo is too long a step to take in one go: even manufacturer AAI, assisting the Picatinny boffins with the new kit, admits that caseless is "higher risk". Plastic-cased-telescoped is simpler to achieve and seems to offer major advantages right off. You can read more about it courtesy of the US Army's Research, Development and Engineering Command, here, here and here, and from manufacturer AAI here in pdf. ®

The reluctance on the part of the world's militaries to move on to new and improved small-arms technologies is understandable, as it would involve noticeable expense and trouble. However the developed world's armed forces routinely spend vastly greater sums and overcome much greater technical obstacles in order to build improved jet fighters, submarines, heavy tanks etc. Even back during the Cold War when these things were very important it was foot soldiers carrying individual weapons who actually did most of the fighting and dying, however: and nowadays infantry warfare really ought to be the most pressing priority for every advanced military.

It seems downright perverse to us here on the Reg defence desk to be spending billions to further increase Western fighter pilots' and submarine captains' already excellent chances of victory in future conflicts that are vanishingly unlikely to happen (as we are doing) and not spend the much more modest sums that would give our hard-pressed combat troops - who are actually fighting a real war right now - better firepower in lighter packages. ®

*Section, in British usage. The section/squad is split into two fire-teams of four, each with one machine-gunner.