Solaris 10 will be sticking around for a long time

Don't get the wrong idea. Solaris 10 is going to be around. Say what you will about Oracle, but the company acquires software companies and is perfectly happy living off those maintenance streams, gradually increasing maintenance fees and supporting customers until it becomes so painful they move to more current alternatives.

Fowler said that Solaris 10, which was launched in January 2005, would be getting its own updates soon and would, in fact, be supported on future Sparc T5 and M4 systems due next year. He said that at some point, Solaris 10 would enter a period where it was on extended support, and at that point that venerable operating system would have a decade more of life support.

"There isn't a near-term, epochal event that will force customers to go to Solaris 11," explained Fowler. "Solaris 10 will be supported for many, many years."

It is reasonably to conjecture that older Sparc64 chips of a similar vintage to the UltraSparc chips outlined above, can't run the OS. Oracle is not saying. The hardware compatibility list for Solaris 11 Express says that the development release was supported on Sparc Enterprise M3000, 4000, 5000, 8000, and 9000 machines and these support multiple generations of Sparc64 chips. But don't read too much into that. Solaris 11 Express was also certified to run on many older UltraSparc machines. Just because the software works on a machine doesn't mean Oracle will offer tech support for it. Apparently, the virtual memory manager in the new Solaris 11 kernel takes advantage of hardware features only in the more recent chips.

The company is similarly not being precise about how many cores and threads that new Solaris 11 kernel can support or how much main memory or storage it can address. Markus Flierl, vice president of Solaris engineering, gave El Reg a briefing ahead of the formal Solaris 11 launch and all he would say is that Solaris 11 was already running across the future Sparc M4 high-end server processors due next year (and coming a little early to market at that).

The M4 processors span from 8 to 64 sockets, like the current Sparc64-VII+ chips from Fujitsu do, and are expected to offer six times the throughput and 1.5 times the single-thread performance of the current M3 chips.

On roadmaps for the past year and a half, Fowler has shown that Oracle's long-term goal is to deliver in late 2014 or early 2015 a machine that has 64 sockets with a total of 16,384 threads and supporting 64TB of main memory. Like the rest of you, I am dying to know if the Solaris 11 kernel has been tweaked to do this already.

That is a huge leap in thread count, with Solaris 10 only scaling to 512 threads in a single system image. The Solaris 11 feature table seems to imply that the Solaris kernel has already been architected to support "100s of cores and 10,000s of HW threads," as you can see: 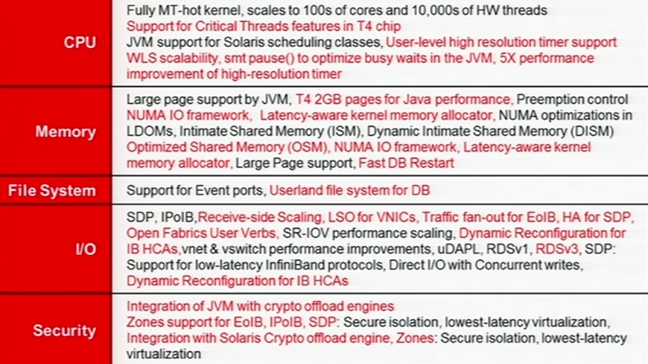 Solaris 11 offers full binary compatibility with Solaris 2.6 and later releases, provided that customers are not using private or old APIs that were never officially sanctioned. It has exactly the same pricing and packaging as Solaris 10, and Hewlett-Packard and Dell, which are Solaris 10 OEMs, are allowed to certify Solaris 10 on their gear and distribute it.

The one thing that Oracle refused to comment on is when the source code for Solaris 11 would be available to the former OpenSolaris community. "We have nothing to announce at this time," an Oracle spokeswoman cut off Flierl before he could tell El Reg anything interesting. ®