Can it be true? Yes it is: Brian Cant, the actor who for so many years was viewed as the Play School presenter par exellence did not chalk up the most appearances on the kids programme.

Cant was a Play School from 1964 to 1985, but according to research published by one Paul R Jackson in a new book Here's a House: a Celebration of Play School, he appeared in the show just 620 times: six as a guest, 614 as a presenter.

This places him second only to Carol Chell, which notched up a staggering 763 appearances between 1966 and 1988, 741 as a presenter, 22 as a guest, according to Jackson's work, which was today described cultural commentator Dr Matthew Sweet as possibly "the most gloriously insane act of research ever". 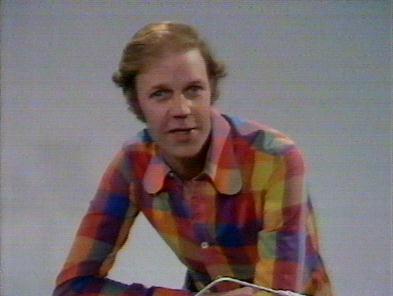 Brian Cant on Play School in 1974
Source: The Chestnut

In third place comes Julie Stevens, who appeared in the programme from its early beginnings until 1978, but still managed to appear 600 times.

Stevens is well known for her appearance in The Avengers as nightclub singer Venus Smith. Indeed, Play School was not averse to using talent better known for cult telly roles.

Brian Cant himself appeared in the Doctor Who story, The Dominators and was joined at various points by Chris Tranchell (Survivors, Doctor Who), Jon Glover (Spitting Image, Survivors, The Hitchhiker's Guide to the Galaxy), Colin Jeavons (K-9 and Company, Granada's Sherlock Holmes), Chloe Ashcroft (Doctor Who) and... er... Stuart McGugan (It Ain't Half Hot Mum).

And what kid growing up in Britain during the 1970s and 1980s could have missed Johnny Ball (545 appearances) and his maths shows, or Fred Harris (382 appearances) from Making the Most of the Micro, Micro File, Micro Live, and Me and My Micro? 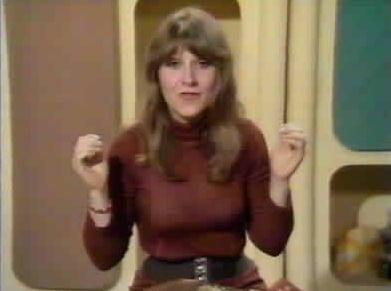 Not on the list: Toni Arthur in 1975
Source: The Chestnut

Floella Benjamin, widely held by certain pub trivia types to be one of the Play School presenters who appeared the most, was only on screen 279 times, putting her in fourteenth place, well behind the likes of Aussie songster Don Spencer (357 appearances), Lionel Morton (343), Carol Ward (310) and Carol Leader (294), but ahead of Derek Griffiths (207).

Special mention must go to the wonderfully named Johnny Silvo, who appeared 105 times during the early 1970s.

Aimed at toddlers, Play School ran on the BBC from 21 April 1964 to 11 March 1988. It spawned identically named shows in the Antipodes - Australia's ABC continues to make and show its version of the programme. ®

More snaps of Play School presenters and folk from other old kids' shows can be viewed over at The Chestnut.