Mars, Moon, solar system could be littered with alien artifacts

It's one of the top alien-related puzzlers: Given the vast number of stars out there, and the great age of the universe, if intelligent life other than ourselves exists even very uncommonly ... why haven't we met it yet? Surely, somewhere in the multitudes of other stars, at some remote juncture in the past, some alien civilisation should have done the same sort of things we have done – for instance sending out space probes similar to the Pioneer and Voyager spacecraft, which are even now headed out into interstellar space perhaps to be discovered aeons hence by denizens of some far-flung star system. 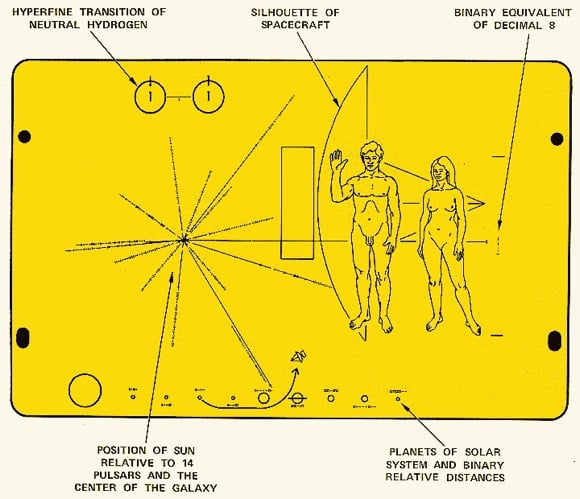 Destined to lie covered in dust and unread on some remote moon while a vibrant alien civilisation arises and then eventually dies out in the same faraway solar system millions of years from now.

This is the Fermi Paradox, which is often used to argue that intelligent life must be extremely, vanishingly rare – or even that we are alone in the universe. Otherwise, by now, some equivalent of the Voyagers and Pioneers ought to have drifted into our solar system. Even if only one in a million stars is home to alien civilisation, that would still mean a sky full of ET cultures.

The problem, according to boffins Jacob Haqq-Misra and Ravi Kumar Kopparapu of Penn State uni, is that it's entirely possible that our Solar System is littered with ancient alien space probes and we simply haven't found them yet. Haqq-Misra and Kopparapu have investigated this mathematically.

"Any remote unpiloted exploratory probes of extraterrestrial origin would likely remain unnoticed," they write. The aliens could fix a plaque explaining all about themselves onto their probe as much as they liked: if it's here it's lying unseen somewhere on Mars, or the Moon, or drifting in space at one of many Lagrange Points etc.

The only place where we'd probably have found an alien spacecraft if there was one to find is the land surface of planet Earth, and even this is by no means a cert. We might soon have a better idea regarding the Moon, thanks to the ongoing activities of the Lunar Reconnaissance Orbiter, but smaller alien probes might be indistinguishable from a rock to the LRO.

"Searches to date of the solar system are sufficiently incomplete that we cannot rule out the possibility that nonterrestrial artifacts are present and may even be observing us," conclude Haqq-Misra and Kopparapu.

This analysis would seem to suggest that millions or billions of years hence, when the Voyagers and Pioneers come to rest in some far-off solar system, NASA's efforts in putting the famous plaques on them may well be wasted as the local aliens – if they exist – will quite probably never be bothered to look around enough to find them.

Their paper On the likelihood of non-terrestrial artifacts in the Solar System has been accepted by the journal Acta Astronautica, and can be read on arXiv here. ®