Although he expressed great confidence in the skycrane system, Theisinger admitted that some uncertainties remain. "You can't do the test in an end-to-end sense," he said, "because you can't land on Mars on the Earth." 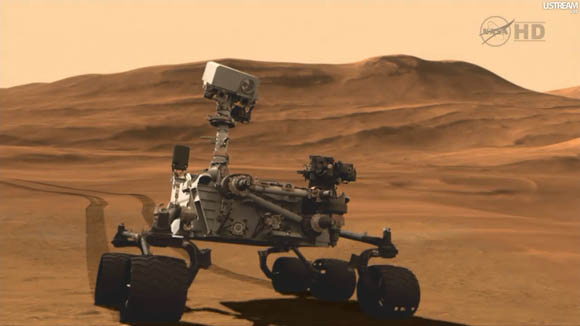 Should Curiosity land successfully, there will be plenty for it to do. As explained by MSL Deputy Project Scientist Ashwin Vasavada, "What really dominates the design of this rover is the fact that it has the ability to sample rocks and soils on Mars for the first time."

That sampling will be done, he explained, using a drill on the end of Curiosity's six-foot robotic arm. The rover can survey its surroundings and pick tasty samples to, well, sample, both with HD cameras and with a laser that can determine the chemical composition of terrain within twenty feet.

Curiosity also has its own weather station, the ability to sound below itself to determine if there are any minerals below that contain water, and a detector for natural high-energy radation. "This kind of radiation is critical to measure for the day when we do send humans to Mars," Vasavada said. 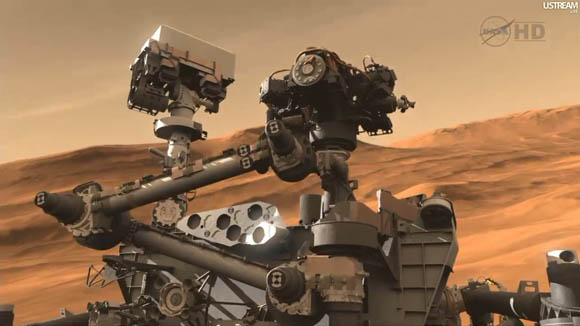 On the tip of the arm is what Vasavada described as "the meat and potatoes" of the MSL: a "whole bunch of sensors", including a magnifying-glass camera, a sensitive chemical detector, and the aforementioned drill.

The drill will dig into the rock and deliver samples to Curiosity's two internal labs for analysis, "which we've never done before on Mars, and that's really where the science will come from." One of those labs will measure the mineral content of the rocks, and the other, as Vasavada explained, "looks element by element, which chemical elements are there, and looks for any organic material that might be present." 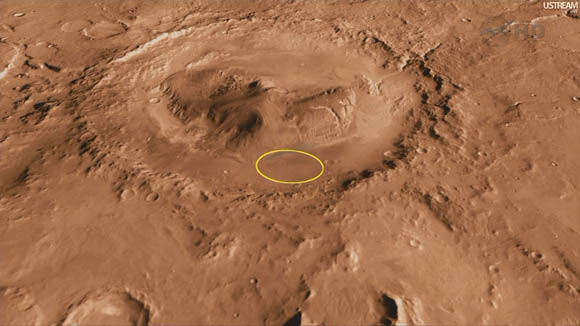 A 20-kilometer target, millions of miles from Earth (click to enlarge)

As might be guessed, MSL's landing site has been carefully chosen: Gale Crater and the three-mile-high mountain in its center. "That mountain inside the crater is what caught the eye of the scientists that have been studying Mars for the last decade, and resulted in it being chosen for this mission."

Gale Crater is about 160 kilometers miles wide, and the landing area is 20 kilometers in diameter – which may sound like it offers a high margin for error, but it's by far the tightest landing zone of any previous Mars mission: previous targets were in the 100-kilometer range.

The great opportunity provided by the mountain – which Curiosity will drive towards at its safe-and-sane speed of one-tenth of a mile per hour – is that it has a layered composition, with both ancient and newer rock open for examination.

Next page: The entire history of Mars in one mountain
Page: