Where are all the decent handheld scribbling tools?

Shove your fondleslab, we want a keyboard

Part 1 As the market for computerised devices grows ever bigger and the internet takes over its users' social lives, it's a good time to be a gadget fan. They're everywhere, from smartphones and fondleslabs to pocket games consoles. There are notebooks of every size and shape from netbooks to desktop replacements. What were once mere MP3 players can now show films, play games and surf the web wirelessly.

In fact with so many gizmos around, it's easy to miss that some kinds of device have actually disappeared. In the decades since micros turned the computer industry inside out, there are dozens of forgotten devices that excelled at what they did, and yet for which no modern equivalents exist. In the world of somehow samey boxes, hundreds of mild variations of a handful of basic designs, you can't buy modern versions of the oddly shaped killer gadgets of the twentieth century.

For instance, tools for writing on the move.

Sure, a notebook can do this – but notebooks are expensive, fragile things that scorch your lap and last a day if they're doing exceptionally well. Worse, the more capable they are, the more distractions there are from getting on with bashing out the words.

Evidence of this is the current rash of special apps for authors, such as WriteRoom, Ulysses and Scrivener. These are stripped-down text editors that give you word counts and margin notes and organise ideas but no (or strictly limited) formatting, no graphics handling, sometimes not even visually distracting extras like menus or toolbars.

They still run on a vanilla notebook, though – usually a Macbook – meaning that you have to carry around a couple of kilos and pushing a thousand quid's worth of portable distraction and work-avoidance technology, plus the inevitable power adapter.

So what's the alternative? Fondleslabs have no keyboard – they're useless for writing on. Netbooks have tiny cramped keyboards and screens and are just as distraction-prone as proper notebooks.

But there is another way – and there have been various stabs at this problem over the years.

Arguably the first laptop personal computer was the Epson HX-20, with a tiny 20-column-by-4-row screen – but the form factor was there: full-size keyboard, battery power and even a tiny onboard printer. It didn't do much except run BASIC, but it was a much-loved device in its time.

The next step from such devices was a Japanese-American classic: the TRS-80 Model 100. 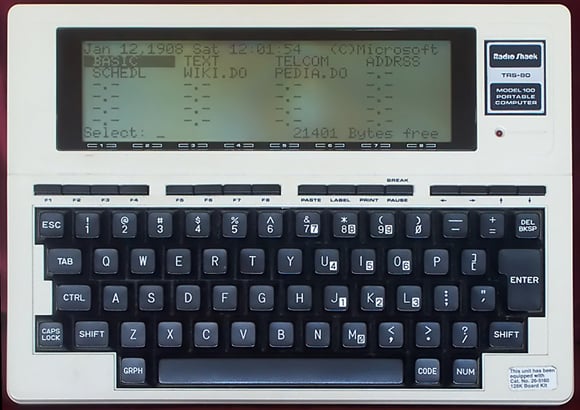 This had actual applications in its ROM, some developed by Bill Gates himself; a text editor, terminal program, address book and task organiser – and BASIC, of course. It became a travelling companion for many journalists: not only could you write copy on it, but transmit it back to HQ by modem as well. Despite its stone-age spec, the 28-year-old machine still has happy users and an active user group. It spawned various imitators, many based around the same core Kyocera hardware: Olivetti's M-10 and NEC's PC-8201 and PC-8300. 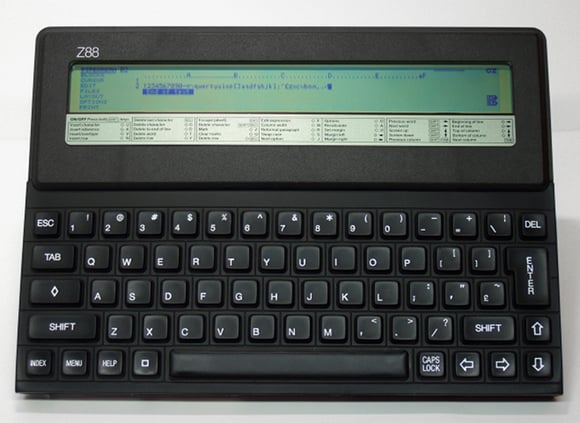 Although it ran BBC BASIC, the Z88 was in some ways a distant descendant of Sinclair's ZX Spectrum – complete with a very usable and silent full-size full-travel version of the original Speccy's rubbery "dead flesh" membrane keyboard.

The Z88 was, in true Sinkers style, a bit odd. Its non-multitasking "Oz" operating system nonetheless allowed switching between multiple instances of applications, so you could work on several files at once in its sole app, Pipedream, a curious sort of combined spreadsheet-cum-word-processor-cum-database. The Z88 had a generous three slots for its sadly proprietary RAM or EPROM storage cards. These days, you can upgrade the OS, fit extra RAM, get ginormous one megabyte Flash cards and still buy new accessories and software.

As it did with the Spectrum, Amstrad came along a few years later with an improved device that fixed a lot of the weirdnesses of the original. 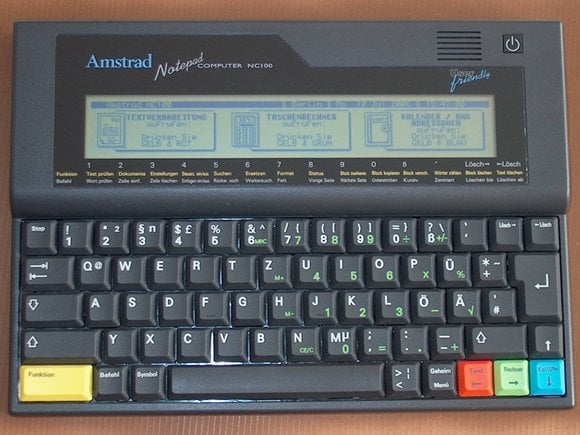 The NC100 had a bigger screen, more RAM, a more conventional keyboard and used a PCMCIA slot for extra RAM. It ran the now forgotten but once best-selling British multi-platform word processor Protext, which itself is now freeware. There were later models – the European-only NC150 added extra applications and the laptop-like NC200 went clamshell with a bigger screen plus an onboard floppy drive (that only worked while your batteries were really fresh). The NC100 was the classic model, though. For example, The Independent said it was "how computers should be". Of course, the NC100 too still has an active user group.

Probably the last gasp of this form of device is, remarkably, still on sale. For a princely $350, you can own a Dana. Essentially a large-form-factor version of the old 68000 Palm Pilot, it was released in 2002 – oddly, just when Palm itself was switching to ARM chips. The original maker, Alphasmart, lumbered its highest-end device with the older, slower chip and less-flexible OS, probably in pursuit of reducing costs. It didn't work.

Next page: Neo... nobody has ever done this before
Page:

This and wearables fortified with machine learning to serve you, human
Personal Tech6 Oct 2022 | 4

I think we can handle one little Russia. We sent two units, they're bringing any attempts down now
Security6 Oct 2022 | 10