Two out of three ain't bad

Yelp has released an update for its iPhone app, and in doing so snuck in a not-too-subtle dig at Republican presidential hopeful Rick Perry.

For Reg readers either outside the US or living in a cave stateside, Perry uttered an epic FAIL at a Wednesday night debate, forgetting the third US government agency that he planned to eliminate if he were to be elected president:

UPDATE: The stumblin' Perry video formerly available here was yanked from YouTube late on Friday, though the relevant section can be found 1:35 into this longer segment – that is, until it may disappear, as well.

"It's three agencies of government when I get there that are gone," Perry said on national TV at CNBC's "Your Money, Your Vote" confab, "Commerce, Education, and the ... uh ... uh ... what's the third one there? Let's see..."

Perry continued on to dig himself into an even deeper hole, finally ending with a simple "Oops"

Yelp introduced its 5.4.3 update of its iPhone app on Thursday, which featured this description: 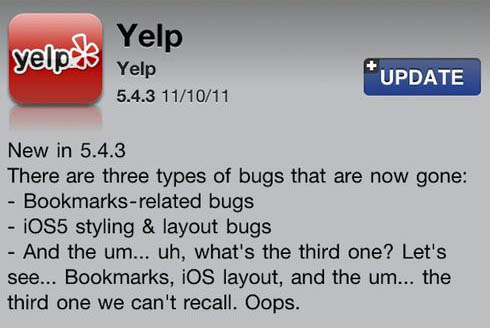 Yelp's update gleefully kicks the Texas governor when he's down

When Perry entered the Republican race in August, he quickly shot to the top of polls, passing putative front-runner Mitt "Plain Vanilla" Romney, but quickly sank due to lackluster debate performances and a bizarre – and, to some, apparently alcohol-fueled – campaign speech that became a YouTube must-see.

And now he's the butt of iPhone-app-upgrade mockery.

Ah, the vagaries of the American political circus. ®