That button is labeled “IS THAT CANON?”

Once you hit it, you can assign these aberrations to a parallel universe, or alternate timestream, leaving the time forever a quarter to three, with a Broth Of Oblivion still for tea. But now this cunning smart bomb of the mind is becoming ineffectual.

The last six-odd years have seen some reckless toying with the very fabric of the programme, and we don’t mean Captain Jack’s shrinking muscle vest, or Amy’s policewoman outfit. Even more unedifying and illogical than the Doctor having a daughter, or dancing in public, or gaining a mortal double who has eloped with Rose Tyler, are the newly accepted, often teary-eyed methods of story resolution. 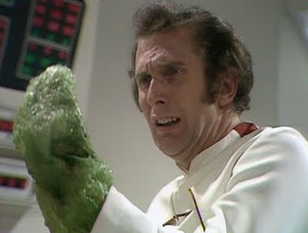 Once upon a time, a non-hysterical make-do attitude prevailed in Doctor Who, and was reflected in stolid, often-recurring supporting actors sufficiently trained to take anything seriously, and the proper British rubbish churned out in the special effects department.

The legends of kids hiding behind couches were forged in these days of adversaries made of old fag packets, cellophane and wallpaper – a personal fave being the chicken suited “Chronovore” Kronos from the 1972 Third Doctor adventure, The Time Monster.

“Of course!” comments the Doctor. “We’re seeing through the TOMTIT gap into the time vortex.”

Throughout the first run – and remember, even the Hell’s Angels watched it at the time (here’s proof at 20m:23s) – the cheapness was always balanced with mind-warping, reality-busting imagination. Oftentimes they crossed over; see 1979’s City of Death, a bizarro time-leaping tale of the alien Scaroth trying to prevent his own fragmentation in pre-history by er, flogging copies of the Mona Lisa to finance spare parts for his time machine. Imagine the info-graphic of alien intelligences active throughout Earth’s history! 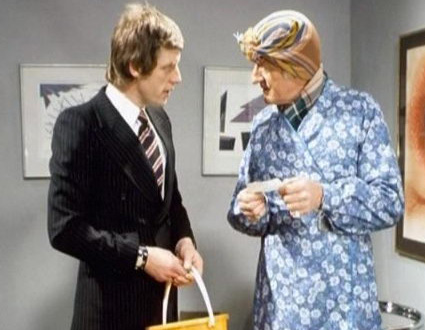 The End of the Daleks

To illustrate the differences, let’s do some fantastical denouement comparisons for Dalek stories.

Today, anybody under the age of about 51 can only experience the ‘65/’66 12-parter The Dalek Masterplan via narrated audio, but when the First Doctor reflects on the devastation wrought by the Time Destructor, he clucks amusedly at the annihilation of the Daleks, but then mutters darkly about the terrible waste of lives – including the death of short-lived, fratricidal companion Sara Kingdom. It’s the Second World War, and the Daleks are the Nazis.

Next page: Too much soppy stuff
Page: