Review Skyrim is set in the land of the Nords, a craggy treacherous landscape that reminds me of George R R Martin's series A Song of Ice and Fire and has the same epic scale. After the King of Skyrim is assassinated the land is plunged into civil war and the region has become severed from the rest of the empire. The game starts by leading me to my execution, luckily it is cut short by a very fiery intervention. 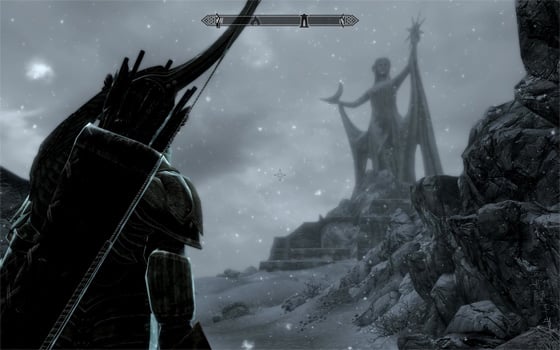 The first thing I do in Skyrim is choose my race and, of course, I chose to be a pussy (Khajiit), figuring those nine lives would come in useful. But not, as it turns out, quite as useful as making sure I save the game regularly.

The facial customisation was fun but ultimately pointless as I soon found a helmet on a dead guard I stuck it on and it gave me +16 amour. Still, Over the weekend everyone on Steam has been talking about the Orc faces and how convincing they look, so I am almost tempted to re-role! 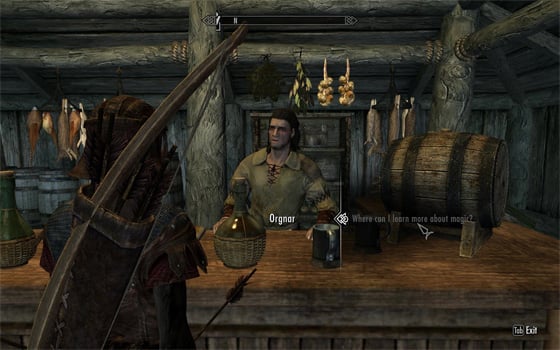 Where can I find Paul Daniels?

In Skyrim I don't choose a class, I become a class through my actions. I wanted to be an assassin using my stealth and cunning to defeat enemies. In order to use my perk points to get x15 backstab damage I need to spend a lot of time being stealthy, which isn't hard when I was sneaking around dungeons wondering what was around the next corner.

Cutting down from a ridiculous 27 in Morrowind and still over enthusiastic 21 in Oblivion, Skyrim has condensed the skills I can progress in to more comfortable 18. My astrological skills tree is beautiful and a real visual treat: my own personal constellation in HD space - who needs Hubble? In order to access the higher level abilities on the skill trees, I am expected to actually spend time gaining experience in weapons etc rather than allocating it. 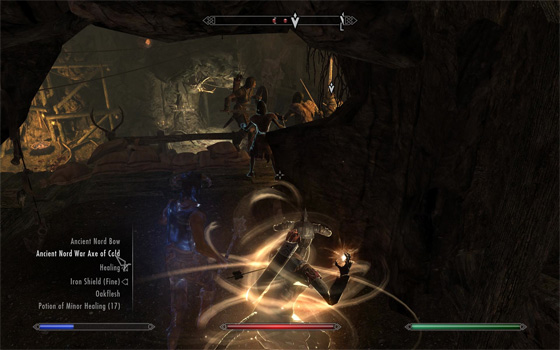 Don't balls it up

Every time I went up a level, I got ten points to put either magicka, health or stamina. Unsure of what was to come, I tried to stay balanced but ended up putting slightly more into magicka because I wanted to attend magic school just like Harry Potter.

In Skyrim, the ability to fast travel or steal the odd horse makes exploration less of a grind and as I look around I'm impressed with the pretty pretty, but I suspect it will be less so on your console - or run nearly as smoothly as it does on my PC.

Next page: Wowzers on the scenic front
Page: