Exclusive Animal rights group Peta has despatched a brace of near-naked operatives to Arizona in a bid to lure Prince Harry away from the delights of meat.

The less-than-covert insertion of the pair of barely covered activists will cause yet more distraction for right royal playboy and his retinue, as Harry attempts to complete his chopper weapons training in peace.

The Mayor of Gila Bend, where Harry is undergoing his final phase of training, reportedly warned the partying Wales off fornicating with the local maidenry before saying he'd been misquoted and offering Harry a pizza and beer summit instead.

Harry had already enjoyed the delights of Gila Bend's Little Italy Restaurant, where he reportedly enjoyed the Meat Lover's pizza, replete with majestic amounts of bacon, ham, Italian sausage and pepperoni, leaving at least one waitress panting with gratitude.

However, animal rights org PETA (People for the Ethical Treatment of Animals) is now seeking to dissuade Harry, and the residents of Gila Bend, from consuming carcass-based protein.

To this end, they have sent in a pair of "sexy señoritas" in chilli-pepper bikinis who openly invited the prince to a "spicy" night out in Gila Bend. 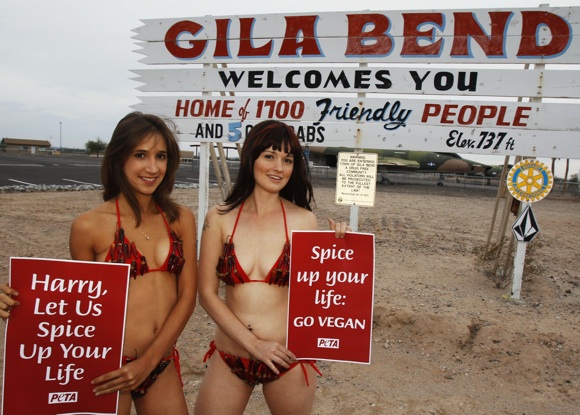 For the benefit of the royal protection squad...

The pair are also handing out copies of the organisation's vegetarian and vegan starter pack to local residents.

While pushing the claimed benefits of relieving animals from suffering in farms, abattoirs and fishing boats, the highly toned operatives will also be telling Harry and anyone else who will listen that: "Eliminating meat and other animal-derived products from your diet can also lead to a sizzling physique and plenty of heat in the bedroom."

This isn't the first time PETA have targeted the Wayward Prince Wales. They've previously called on him to give up his favourite birthday treat of shooting birds, to no avail.

We think they might be onto a loser in persuading Harry to lay off the meat and birds. However, it's just possible they could distract him long enough to protect the girls of Gila Bend from any regal fornication. 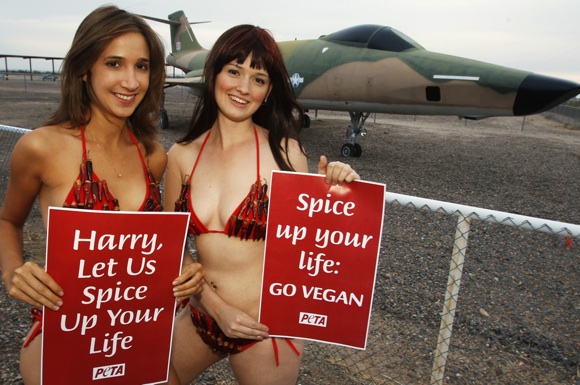