Westwood's designs, often under absurdly tight budget restraints, were never text-book, and sometimes radically risky. The notoriously high return rate on Sinclair products was disguised by the fact that many were sold in kit form. But there's no question that in pushing the envelope of how much could be got out of how little, some of the designs were essentially self-destructive. 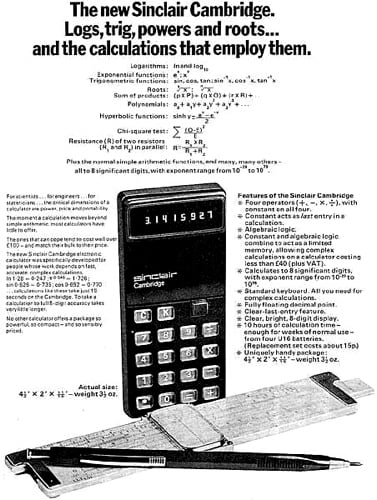 By the early 1970s "Sinclair" had become a household name, and it was time for a shift from audio. Today, when you can pick one up in Poundland, it's difficult to imagine the impact of "The Executive", a sleek, black, shirt-pocket calculator that could be yours for as little as £79.95 - just a couple of weeks' wages in those days! Only four years earlier, Hewlett-Packard had introduced the first desktop electronic calculator, the HP-9100 for a price that amounted to around £20,000 in today's money.

Once again, Westwood's design was cash-squeezed, but this time there was an even bigger problem. There was a good reason why the Americans and Japanese had so far stayed away from a pocket calculator. The components were particularly power-hungry, dictating a mains connection, or at the very least large batteries.

The display LEDs alone ate a lot of juice, but there was a standard solution to this. Instead of supplying steady power, you rapidly switched the LEDs on and off. If pulsed at around 60Hz you could save power while relying on human persistence of vision to see the light as continuous.

The trick tickled Westwood's fancy, and he found himself wondering whether it could be extended across the whole device. There was nothing in the specs for the Texas Instruments GLS 1802 calculator chip to suggest this was possible. But, after all, the circuit did include a number of capacitors, components that behave like tiny temporary batteries. Would they be able to sustain power between the pulses reliably enough to ensure there was no data loss? 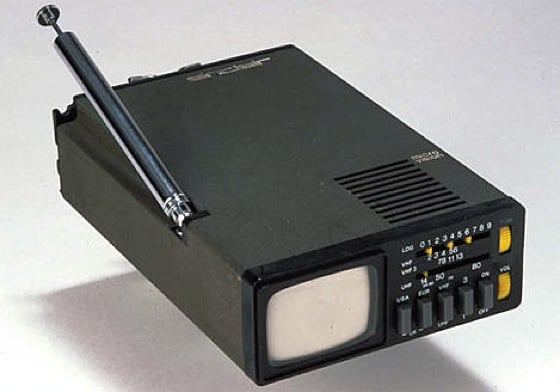 After the calculator, the telly: Sinclair's MTV-1
Source: Retro Thing

Together with Chris Curry, at this stage still a faithful Sinclair acolyte, Westwood ran the tests. The specs said the TI chip needed 350mW of power. And here it was running reliably with a pulsed current at around 20mW. Job done.