Since being redirected away from Bush-era plans for a base on the Moon towards a manned Mars mission, NASA has realigned its nuclear-tech-in-space efforts away from a Moonbase powerplant and towards an atomic-powered rocket able to get astronauts to the red planet quickly, without receiving dangerous exposure to cosmic radiation. 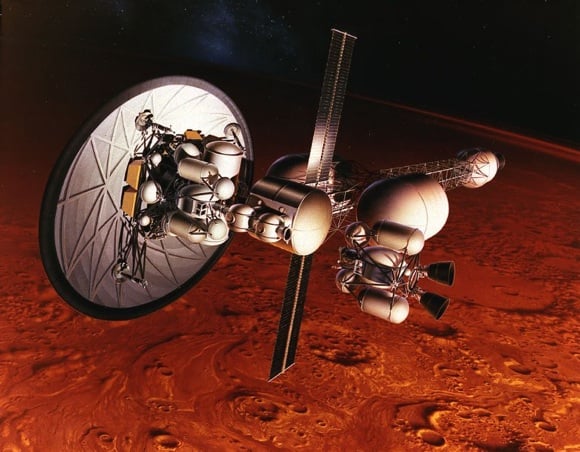 What? It's the year 2011 and you're still mucking about with lousy chemical rockets?

Most plans for a Mars mission assume a ship propelled by ordinary chemical rockets of the type used in all manned missions so far. These get through fuel very rapidly and can only throw it out of their exhausts at a limited rate, putting a strict cap on the speed a Mars ship can achieve if it is to slow down again at its destination and then return. Thus it's generally assumed – as in a recent simulated voyage – that the journey out and back would involve spending a year or more in space.

The big problem with this, one that has yet to really be addressed, is that space is full of dangerous radiation. Normal background cosmic rays are bad enough over a long period: furthermore over a lengthy voyage it's almost certain that there would be one or more major solar storms which could easily take astronauts over their permitted safe dose limits for the entire journey in a matter of days. Sufficient shielding to make a spaceship safe would be so heavy that the craft could probably never be lifted off Earth at reasonable cost.

The only people who have ever been subject to these hazards were the Apollo moon astronauts of yesteryear, and their journeys beyond the protective magnetic fields of Earth were only days long. Even then an inopportune solar event during an Apollo mission could have had disastrous consequences.

For all these reasons, it would be a good idea if more powerful propulsion than chemical rockets could be used for the trip, so cutting down journey time and hazard to the crew. This could also mean less need for supplies, improving the feasibility of the whole plan.

Since nobody has yet come up with any way to provide a thrust in space without throwing reaction mass out of the back of the ship, these various more advanced concepts are still rockets: but they use different means of hurling the mass.

One such concept is to heat the fuel up not by burning it with oxidiser, but using a nuclear reactor. This can potentially make it a lot hotter than mere burning, so expelling it from the exhaust faster and getting more poke out of a given amount of fuel. It was formerly assumed that such rockets would actually become the standard means not of interplanetary travel, but also of normal space launch: the visionaries of the 1940s, if they could have looked ahead to today, would have been dumfounded to find humanity still reliant on feeble chemical propellants (so lame that they have to be used in throwaway multi-stage stacks to achieve orbit) in the year 2011.

The nuclear-safety principle of As Low As Reasonably Achievable on emissions put paid to the idea of using nuclear rockets in atmosphere, though NASA was still working on them as late as 1973 – funnily enough with the idea of using them on manned Mars missions. But the NERVA programme fell victim to the post-Apollo NASA budget cuts, and since then very little work has been done on nuclear rockets as such.

However, under President Bush's Constellation plans, NASA was directed to return to the Moon – and perhaps to establish a permanently manned base there. Such a base would need power, and unless it could be built in a permanently-sunlit spot atop a towering crater rim at one of the lunar poles, solar power would not be an option as most of the Moon is subject to extremely cold two-week-long nights.

Thus, boffins at NASA's Marshall Space Flight Center began work on a small nuclear reactor that could be shipped to the Moon. That plan lost its purpose when President Obama, having found that Congress wouldn't authorise enough cash to pay for the Constellation moon plans, scrapped the idea and laid out vague aspirations for manned deep-space missions to other destinations – including Mars.